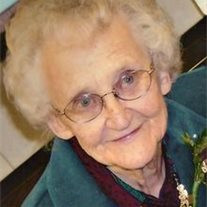 Lorane Elsie Elizabeth Peterson, age 93, of Dassel, died Friday, July 29, 2016, at her daughters home. A funeral service will be held on Friday, August 5, 2016, at 1:00 p.m. at the Lake Jennie Covenant Church in rural Dassel with the Rev. Douglas Pierce officiating. There will be an interment of the urn on a later date at the Lake Jennie Covenant Church Cemetery, rural Dassel. There will be a time to gather with the family on Thursday evening from 5:00 p.m. to 7:00 p.m. and one hour prior to the service on Friday at the Lake Jennie Covenant Church in rural Dassel. The Johnson Funeral Home in Dassel is in charge of the funeral arrangements. Lorane, the daughter of Paul and Karen (Norman) Bergquist was born July 9, 1923, in rural Stockholm Township, Wright County, Minnesota. She was the third of five children. Lorane was baptized at the Stockholm Lutheran Church, rural Cokato, MN. She attended school for the first six years at the Dahl School in Stockholm Township. Following the death of her father from tuberculosis, the family moved into Cokato and Lorane finished her schooling and graduated from Cokato High School. Following high school she attended Teacher Training Classes in Litchfield, MN, and served two years as a country school teacher in Winthrop, MN and Gibbon, MN. She met her husband, Lowell Peterson, in the fall of 1939, and they were united in marriage on February 22, 1944. At that time, Lowell was in the service so she traveled to follow him as he was moved from post to post. She returned to Cokato at Christmas of 1944 to await the arrival of their twin sons, who were born in February of 1945 while Lowell was still serving in the Philippines during World War II. Lowell returned home from the service in early 1946. He and Lorane moved to the "Old Place" where four more children were born before moving to the family farm on the north side of Lake Jennie in 1954. Lorane assisted Lowell in the management of the farm and saw to the raising of their six children. She was a member of Lake Jennie Covenant Church for 60 years, and will be remembered for her faithfulness as a piano player up until shortly before her passing. She was also involved in Ladies Aide and many other aspects of the church's life. Lorane enjoyed traveling with Lowell, including a memorable trip to Sweden. Lorane was steadfast in her care of Lowell following his stroke in 2004 and, with the help of family, was able to keep him at home with her until his passing on December 31, 2014. She will be remembered for her hospitality. She was a great cook, and was known for her wonderful homemade pies, Swedish kringle, and egg coffee which was always available when anyone dropped in for a visit. She is survived by her children, Steven (Bonnie) Peterson of Dassel; Lowell Jr. (Lorraine) Peterson of Dassel; Arlene (David) Prieve of Dassel; Wendy (Jeff) Rausch of Dassel; Meribeth (Thomas) Reynolds of Dassel; Nancy (Charles) Green of Spicewood, TX; daughter-in-law, Marsha Peterson, of Dallas, Texas; 19 grandchildren, 32 great grandchildren, and two great-great grandchildren; sisters, Muriel Nelson of Litchfield, and Carol Nelson of Grove City; and sister-in-law, Marjorie Mattson of Cokato. She was preceded in death by her husband Lowell, son, Michael, granddaughter, Kimberly Peterson, brother, Ralph, sister, Vivian and parents, Karen & Paul Bergquist.

Lorane Elsie Elizabeth Peterson, age 93, of Dassel, died Friday, July 29, 2016, at her daughters home. A funeral service will be held on Friday, August 5, 2016, at 1:00 p.m. at the Lake Jennie Covenant Church in rural Dassel with the Rev. Douglas... View Obituary & Service Information

The family of Lorane Elsie Elizabeth Peterson created this Life Tributes page to make it easy to share your memories.