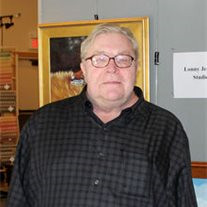 Lonny Eugene Jensen, age 67, of Dassel, died Thursday, March 10, 2016, at the Hutchinson Hospital. A memorial service will be held at 2:30 p.m. on Wednesday, March 16, 2016, at the Gethsemane Lutheran Church in Dassel. There will be a one hour time to gather with the family prior to the service on Wednesday at the Gethsemane Lutheran Church in Dassel. In lieu of flowers memorials are preferred. The Johnson Funeral Home in Dassel is in charge of the memorial arrangements. Lonny Eugene Jensen, the son of David A. and Nona (Mills) Jensen, was born on April 15, 1948, at the Swedish Hospital in Minneapolis, Minnesota. Lonny was baptized and confirmed in the Christian faith and was presently a member of Gethsemane Lutheran Church in Dassel. Lonny grew up in Buffalo and graduated from Buffalo High School in 1966. He then attended St. Cloud State College for one year. He then enlisted and served in the United States Army and was a Military Policeman from 1967 until 1970 and was stationed in upstate New York. Upon his discharge, Lonny attended Mankato State University where he received a degree in Art Education. On February 21, 1976, Lonny was united in marriage to Mary Olson, at the First Lutheran Church in Dassel. Together they made their home in Dassel where they raised their son, Alexander. Lonny was employed at Bowman Sheet Metal in Buffalo. He was later employed for 26 years at BERK Manufacturing in Litchfield. Lonny was a member of the Dassel Volunteer Fire Department from 1976 to 1998. He was a quiet, honest and kind man who always thought about others. He loved his family and shared his joy of the outdoors with his son teaching him how to hunt, fish and just enjoy nature. He was a talented artist and had painted a fence mural for the Dassel Area Historical Society and participated in several art shows. He could do many things from building a boat for duck hunting to playing the drums. His family will miss him deeply. He is survived by his wife, Mary Jensen of Dassel and his son, Alexander David Jensen of Manannah, one brother, David (Molly) Jensen of Sonoma, California, nephew Ryan Jensen and brother-in-law Roland Mills of Buffalo, Minnesota. He is also survived by his brother-in-law, David Laurel of Raleigh, North Carolina, nephews, Patrick, Mike, John, and their spouses and children. He was preceded in death by his parents, sister, Linnea Mills, an infant brother and a sister-in-law, Karen (Olson) Laurel.

Lonny Eugene Jensen, age 67, of Dassel, died Thursday, March 10, 2016, at the Hutchinson Hospital. A memorial service will be held at 2:30 p.m. on Wednesday, March 16, 2016, at the Gethsemane Lutheran Church in Dassel. There will be a one... View Obituary & Service Information

The family of Lonny Eugene Jensen created this Life Tributes page to make it easy to share your memories.