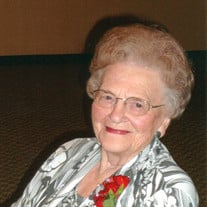 Lois Mae J. (Nelson) Danielson, age 94, of Dassel, formerly of Cokato, died Wednesday, September 4, 2019, at the Augustana Lakeside Health Care Center of Dassel. A funeral service will be held on Sunday, September 8, 2019, at 2:30 p.m. at the Stockholm Lutheran Church in rural Cokato with Pastor Mark Little officiating. Interment will be held at the Stockholm Lutheran Cemetery. A visitation will be held on Saturday evening from 5:00 p.m. to 7:00 p.m. at the Johnson Funeral Home in Dassel and one hour prior to the service on Sunday at the Stockholm Lutheran Church. Lois Mae June (Nelson) Danielson, the daughter of Alfred and Bertina (Amdahl) Nelson was born on June 30, 1925, in Litchfield, Meeker County, Minnesota. Lois Mae grew up in Litchfield and attended schools there, graduating from Litchfield High School in 1943. Lois Mae was a member of the Litchfield Lutheran Church where she was baptized and confirmed. On October 12, 1946, Lois Mae was united in marriage to Eldon Danielson at the Litchfield Lutheran Church. Together they celebrated 66 years of marriage. Lois Mae and Eldon farmed southeast of Dassel from 1946 until 1960. In 1960, they moved to Stockholm Township where they farmed until 1977. At that time Lois Mae and Eldon became park managers of the Wright County Collinwood Park until 1987. From there they moved to Cokato and resided until 2010 at which time they moved to the Lakeside Community of Dassel. Lois Mae worked outside of the home for several years as a store clerk, cook and waitress at various businesses in Dassel and Cokato. Lois Mae enjoyed her membership at Stockholm Lutheran Church where she served on the board, was a leader of the church Hi-League, and was active in LCW. Lois Mae was a woman who took pleasure in sharing time with people. She could often be found attending her children, grandchildren, and great-grandchildren’s events. She was active in the Collinwood Club, Stockholm Birthday Club, and sewing clubs in Dassel and Cokato. She found great delight in participating in many activities while being a member of the Lakeside Community in Dassel. Lois Mae was a lovely and considerate woman who delighted in her roles as a caring wife, mother, grandmother, great-grandmother, and friend. She will be deeply missed by family and friends. She is survived by her children, Sherman (Yvonne) Danielson of Stillwater, Cheryl (Philip) Ragis of Eagan, Duane Danielson of Cokato, and Brian (Jody) Danielson of Dassel, 12 grandchildren, Daren Danielson, Chelon Morrill, Nathan Danielson, Aaron Danielson, Lindsay Ragis, Torrey Keith, Travis Keith, Dallas Danielson, Cassie Akerson, Melia Madson, Ashley Toms, and Keaton Danielson, and 28 great-grandchildren. Lois Mae was preceded in death by her husband, Eldon Danielson, her parents, three siblings, Harlow Nelson, Odessa Forsman, Curtis Nelson, great-granddaughter, Natalie Danielson, and Steve Toms, husband of her granddaughter, Ashley.

Lois Mae J. (Nelson) Danielson, age 94, of Dassel, formerly of Cokato, died Wednesday, September 4, 2019, at the Augustana Lakeside Health Care Center of Dassel. A funeral service will be held on Sunday, September 8, 2019, at 2:30 p.m. at the... View Obituary & Service Information

The family of Lois Mae June Danielson created this Life Tributes page to make it easy to share your memories.