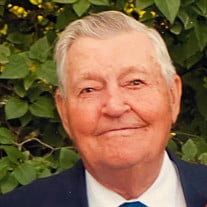 Linton Ernest Isaacson, 102 of Dassel died Saturday, March 5, 2022, at Lakeside Health Care Center in Dassel. A funeral service will be held on Friday, March 11, 2022, at 1:00 p.m. at the Gethsemane Lutheran Church in Dassel with Rev. Janine Olson officiating. The interment will be held at the Dassel Community Cemetery following the service. There will be a one-hour visitation prior to the service on Friday at the Gethsemane Lutheran Church in Dassel. The Johnson Funeral Home in Dassel is in charge of the funeral arrangements. Linton Ernest Isaacson, the third son of Ernest and Selma (Olson) Isaacson, was born at home near Smith Lake east of Cokato on July 30, 1919. He was baptized into the Christian faith on October 16, 1919, at the Evangelical Lutheran Church in Cokato, Minnesota and later confirmed at Gethsemane Lutheran Church in Dassel, Minnesota. Linton attended school in Dassel and graduated in 1938. He was good at sports and played basketball and baseball in high school. At the tender age of five, Linton's mother passed away. As a young lad, he became a hard worker responsible for outdoor chores feeding the cattle, the work horses, chickens, and working in the hay and corn fields. He began working for Great Northern Railroad in 1940 and worked there until retirement in 1980. He was united in marriage to Evelyn Klimstra in a double wedding ceremony with his brother Willard and Evelyn's twin sister, Emelyn at Swan Lake Lutheran Church on August 16, 1941. He served in the military from October 29, 1942, until February 1, 1946, and involved in combat action in the Philippines, New Guinea, Luzon and Pellieu. He was on a battleship to Japan when the Armistice was declared in 1945. Linton was a faithful member of Gethsemane Lutheran Church where he taught Sunday School for over 30 years, served on the church council; education, and properties boards; and Men's Bible Study. He read his Bible faithfully and prayed for his loved ones each evening. He was a substitute custodian when his father-in-law, Dewey Klimstra, was unavailable. His children often accompanied him to "ride the rope" when he rang the church bell at 6:00 p.m. on Saturday night. On Sunday, you'd find him in the church kitchen making egg coffee for after-service fellowship. He was a member of the Veterans of Foreign Wars for over 50 years and a lifetime member of the Paul F. Dille American Legion. He was the American Legion Grand Marshal in the Red Rooster Day Parade on Labor Day in 2021. He was honored as Aquatennial Ambassador in 2019 for his many years serving as "pit boss" for the annual Red Rooster Day barbequed chicken event. He was an avid summer fisherman and the local winter "barometer" using his long-handled steel rod to test the "questionably safe" thickness for ice houses. He played baseball for the town team, belonged to the local bowling league, and threw in several horseshoe tournaments. Linton is survived by Ralph Isaacson of St. Paul, Connie (Marland) Meyer of Litchfield; grandchildren; Seth (Sara) Isaacson, Leah Jorgensen (special friend Joel Griffin), Eric (Robynn) Isaacson, Ellen (Brent) Skaja, Justin (Lisa) Meyer, David (Miranda) Meyer, Heather (Judd) Wheatley, Heidi (Dan) Schabert, Heath (Kristin) Isaacson. Great-grandchildren, Sebastian, Solomon, Savanna, and Scarlett Isaacson, Bailey, Kendall, and Jared Isaacson, Anna and Betty Skaja, Jordan and Jalayna Meyer, Isabella Meyer, Trent Wheatley, and Jenna Schaberg (special friend Savannah Schaefer). Daughters-in­ law Renee Isaacson and Bonnie Isaacson, and a 107-year-old sister, Mamie Holm, of Willmar. He is also survived by many nieces, nephews, and younger friends. He was preceded in death by his wife of 78 years in 2019, son Dennis in 2014, son Loren in 2018, daughter-in-law Priscilla in 2005, brothers and sisters-in-law Raynold and Margaret, Willard and Emelyn, Delbert and Lorraine, brother-in-law Lowell Holm, and sister-in-law Luella Nass and her husband Raymond. In lieu of flowers or memorials, please make a donation in his memory to an organization of your choice.

Linton Ernest Isaacson, 102 of Dassel died Saturday, March 5, 2022, at Lakeside Health Care Center in Dassel. A funeral service will be held on Friday, March 11, 2022, at 1:00 p.m. at the Gethsemane Lutheran Church in Dassel with Rev. Janine... View Obituary & Service Information

The family of Linton Ernest Isaacson created this Life Tributes page to make it easy to share your memories.