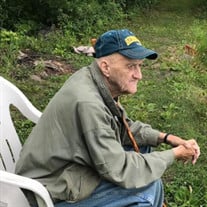 LeVerne “Le” Holmquist, age 82, of Dassel, Loved by family, passed away on August 27, 2020 within God’s grace and peace. A private burial, with full military honors, will be at Fort Snelling National Cemetery. A reception in his honor will be held September 16, 2020, outside the Lake Jennie Covenant Church, serving his favorite treats -- cinnamon rolls and coffee! If you wish to attend the reception in Le’s honor, mask and social distancing are required. The Johnson Funeral Home in Dassel is in charge of the funeral arrangements. Le was preceded in death by his parents, Edward and Alma; two sisters Dorothy Hedin and Elaine Olson and one niece Cheryl Hanson. His surviving niece and nephews are, Merrilee Olson Jones, Tim Olson, Stan Olson and Dale Hedin. Many thanks to the faithful neighbors, friends, healthcare professionals, first responders and Lake Jennie Covenant Church who aided, enabled, befriended and served him with kindness, grace and generosity. Le served in the Army with Signal Corps, in Nuremburg, Germany while the Berlin Wall was reinforced. He lived in the Merrell Barracks, captured in April 1945, and known as the former headquarters of the “Kaserne,” that is, the Nazi SS signal school. He had an enduring interest in WW II driven by his military duties in many famed historic locations. While in Europe he researched and enjoyed visiting the family’s ancestral Swedish homestead and extended family there. He returned to the family farm, had brief stints in the tool and die industry, local lumber yard, carpentry, and enrollment at University of Minnesota extension studies in the Swedish language. His skills and helpful calloused hands were known to many as both carpenter and creative woodworker. He took pride in the family farm keeping lawns and trees groomed. Evergreens came from Arbor Day Foundation and were planted by Le over the years. Ten saplings, waiting in his refrigerator, were recently planted by family. Selling from his “stove wood” pile he enabled many campfires and cook outs and warmed local homes and ice fishing houses over the years. He will be missed and his memory cherished.

LeVerne &#8220;Le&#8221; Holmquist, age 82, of Dassel, Loved by family, passed away on August 27, 2020 within God&#8217;s grace and peace. A private burial, with full military honors, will be at Fort Snelling National Cemetery. A reception... View Obituary & Service Information

The family of LeVerne "Le" Holmquist created this Life Tributes page to make it easy to share your memories.

Send flowers to the Holmquist family.