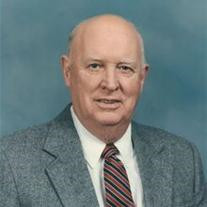 Leslie Edward Anderson, age 93, of Dassel, Minnesota, formerly of Jamestown, New York, died Tuesday, August 28, 2012, at the Meeker Memorial Hospital in Litchfield, Minnesota. A memorial service will be held at 2:00 pm on Thursday, September 6, 2012, at the Evangelical Covenant Church in Dassel. Interment will be held on a later date at the Lakeview Cemetery in Jamestown, New York. A time to gather with the family will be held one hour prior to the service in Dassel at the Evangelical Covenant Church. Johnson Funeral Home in Dassel is in charge of the arrangements. Leslie Edward Anderson, the son of Ernest H. and Emma (Sundin) Anderson, was born on July 10, 1919, in Jamestown, New York. He grew up in Jamestown, New York and graduated from Jamestown High School in 1937. Leslie graduated from North Park Junior College in Chicago, Illinois in 1939. He then attended the University of Michigan, graduating with a B.S. degree in Mechanical Engineering in 1943. Upon graduating from the University of Michigan, Leslie was employed by Bell Aircraft in Buffalo, New York as an Aircraft Engineer during World War II. He later was employed as the Chief Plant Engineer for Blackstone Corporation from 1947 - 1982 in Jamestown, New York. On April 3, 1945, Leslie was united in marriage to Virginia Johnson at the Levan's Tea Room in Jamestown. In 1947 they moved from Buffalo to Jamestown where they raised their family. Leslie moved to Dassel in 2010 where he lived with his daughter and her husband, Susan and Keith Carlson, and then moved into Lakeside Apartments where he formed many friendships. Leslie enjoyed spending time with his family, and was very proud of his children, grandchildren and great-grandchildren. He was an avid University of Michigan sports fan and enjoyed watching their games on television. He loved to spend time taking care of his home which he designed and built with the help of his brothers, enjoyed doing the yard work, loved to bowl and fish, collected antique bottles for many years, and enjoyed family vacations on Chautauqua Lake and Lake Erie. He was a member of the Vikings Ingjald Lodge #65, and a lifetime member of Zion Covenant Church in Jamestown. He will be missed deeply by his family and his friends. He is survived by his children, Susan (Rev. Keith) Carlson of Dassel, Minnesota, Daniel (Rachel) Anderson of Willmar, Minnesota, and David (Patti Post) Anderson of Gaithersburg, Maryland, eight grandchildren, Sarah (Chris) Anderson Fiore, Samuel Anderson, Andrew (Anna) Carlson, Kristin Carlson, Timothy (Kelsey) Carlson, Jon (Jessica) Anderson, Myke Anderson, and Lauren (Isaac) Damhof, four great-grandchildren, Nolan, Norah, and Nathan Carlson and Caden Anderson, a brother, LeRoy (Lois) Anderson, a sister, Audrey Johnson and a sister-in-law, Mildred Anderson all of Jamestown, New York. He was preceded in death by his parents, his wife, Virginia, in 1986, his brother, Alvin, and a brother-in-law, Robert Johnson.

The family of Leslie Anderson created this Life Tributes page to make it easy to share your memories.