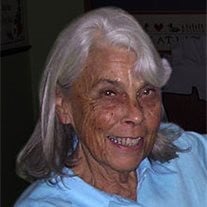 Leatrice Lou Nielsen, age 88, of Dassel died Saturday, January 28, 2017, at the Legacy of Delano. A memorial service will be held on Saturday, February 11, 2017, at 11:00 am at Gethsemane Lutheran Church in Dassel. The interment will be held in the spring. There will be a time to gather with family one hour prior to the service on Saturday, February 11, 2017, at Gethsemane Lutheran Church in Dassel. The Johnson Funeral Home in Dassel is in charge of the memorial service arrangements. Leatrice Lou (Hoover) Nielsen, the daughter of Henry Sylvan and Ardis Florence (Dahlin) Hoover, was born on June 18, 1928, in Minneapolis, Minnesota. She was baptized in the Lutheran Faith and later confirmed at Christ the King Lutheran Church. Leatrice grew up in Minneapolis where she attended school and graduated from Roosevelt High School in Minneapolis. In July of 1946, Leatrice was united in marriage to Ewald "Wally" Nielsen in Minneapolis. Together they made their home in Minneapolis and Bloomington before they decided to move to Sweden in the mid 1960's where they lived for six months before moving back to Minneapolis. In 1974 they moved to a small rural farm near Dassel. Leatrice was ahead of the healthy living life style when the family went organic and Leatrice grew and canned all of the family food. They raised chickens, sheep, rabbits, cattle and had riding horses. She enjoyed sewing, quilting, and knitting, was a master gardener. Leatrice loved to sing and was a member of the Gethsemane Lutheran Church Choir for several years. She had been a member of the Dassel Leikarring Norwegian Folk Dance Group. She took up running and ran a marathon at the age of 60. Leatrice and Wally had biked throughout the state of Minnesota and took a bicycle adventure with their daughter, Judith, biking throughout Europe and through the Alps. She had an adventurous spirit and loved to share her adventures with her husband and her family. She is survived by her children, Bertil (Tammy) Nielsen of Delano, Linda (Robert) Sathre of Two Harbors, and Judith Nielsen of Bavaria, Germany, five grandchildren, Jon Sathre, Autumn Thull, Sadie Nielsen, Elena Nielsen, and Andrew Nielsen, three great grandchildren, Lilix Gustafson, Zepplin Thull, and Luna Thull, and a brother, Gary Hoover of Richfield. She was preceded in death by her husband Ewald "Wally" Nielsen, her son, Jan Nielsen in September of 2014, and her parents.

Leatrice Lou Nielsen, age 88, of Dassel died Saturday, January 28, 2017, at the Legacy of Delano. A memorial service will be held on Saturday, February 11, 2017, at 11:00 am at Gethsemane Lutheran Church in Dassel. The interment will be held... View Obituary & Service Information

The family of Leatrice Lou Nielsen created this Life Tributes page to make it easy to share your memories.

Send flowers to the Nielsen family.