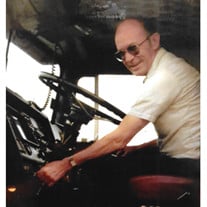 Larry Allen Soderberg, age 80, of Dassel, died Saturday, February 1, 2020, at his residence. A memorial service will be held on Sunday, February 9, 2020, at 2:00 p.m. at the Gethsemane Lutheran Church in Dassel with the Rev. Laurie O’Shea officiating. Interment will be held at a later date. There will be a one-hour visitation prior to the service on Sunday, February 9, 2020 at the Gethsemane Lutheran Church in Dassel. The Paul F. Dille American Legion Post will provide military honors with the United State Army Flag Honor Guard. The Johnson Funeral Home in Dassel is in charge of the memorial arrangements. Larry Allen Soderberg was born in Litchfield, MN on April 21, 1939, to Earl and Ellen (Koistenen) Soderberg. He was baptized at First Lutheran Church in Dassel and attended Dassel Elementary and High School. In 1957, Larry opted to leave high school and joined the United States Army. It was here that Larry discovered his love for truck driving, while he supported the 47th Infantry Regiment in Worm, Germany. He returned to the states in 1959. On May 19, 1962, he was united in marriage to LeRene Carlin. Together they made their home in Dassel and raised three children Brent, Becky and Angela. Larry eventually made his way back to driving the big rigs and worked as an over-the-road driver for many years. He was very proud of his thousands of miles without a single accident or traffic ticket. He loved life on the road, and nothing made him happier than sharing the cab with LeRene, his kids and grandkids on those trips. In addition to his driving, Larry enjoyed jobs at 3M and the local hatcheries, where he became an assistant manager. He also co-owned Dassel MotoSki, with his father in law, Howard. He loved being able to work with his hands and use his natural mechanical talent. Larry could fix anything! No matter what the job, you could count on Larry’s hard work and dependability, and he was proud to have passed these traits on to his kids and grandkids. He loved watching sports, especially his beloved Vikings and Twins. He loved traveling and especially treasured time spent with his family on their many adventures. Larry was always tinkering and fixing things around the house. After a nightly viewing of the news and Wheel of Fortune with LeRene, he enjoyed watching his police shows and even began working on jigsaw puzzles. Larry didn’t say a lot, but when he talked, you definitely needed to listen. Although his words were few, they were definitely filled with compassion, humor and kindness. It is this kindness – and his unending patience – that his family will miss most. What a difference we would see in the world today if we followed his example. Larry is survived by his wife LeRene of Dassel, his children Brent (Joleen) Soderberg of Delano, Becky (Danny) Kenning of Hutchinson, and Angie Anderson of Buffalo. His beloved grandchildren, whom he loved so much: Ellen (TJ Minor) Soderberg, Martin Soderberg, and Elizabeth Soderberg; Blair (Joe) Hendricks; and Aric and Lauren Anderson. His great grandchildren Hayley Bruss and Cody and Gracyn Hendricks. He is further survived by his sister Mary Ann Danielson, sister and brother in law, Tom & Linda Teske, and many nieces and nephews. He was preceded in death by his parents, Earl and Ellen Soderberg. The words, “Still waters run deep,” describes Larry so perfectly. He was a constant, comforting presence and loved his family beyond measure. In turn, he was so loved.

The family of Larry Allen Soderberg created this Life Tributes page to make it easy to share your memories.

Send flowers to the Soderberg family.