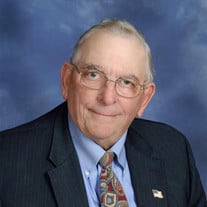 Lail Dean Bergquist, age 84, of Dassel died Tuesday, January 7, 2020, at the Abbott Northwestern Hospital in Minneapolis. A funeral service will be held on Saturday, January 18, 2020, at 11:00 a.m. at the Gethsemane Lutheran Church in Dassel with Rev. Laurie O’Shea officiating. The interment will be held at the Dassel Community Cemetery following the service. Visitation will be on Friday, January 17, 2020, from 4:00 p.m. to 7:00 p.m. at the Johnson Funeral Home in Dassel with a one-hour visitation prior to the service at the church on Saturday. Lail Dean Bergquist, son of Theodore and Margaret (Skalberg) Bergquist, was born on May 2, 1935, in Collinwood Township, Meeker County, Minnesota. He grew up on the family farm helping with farm chores and field work. Lail graduated from the Dassel High School in 1953. Lail was a member of the United States Army National Guard serving from 1953 until 1964. Military service was an important part of Lail’s life. He was proud to be able to attend the graduation from Marine boot camp of two grandsons, Brent Bergquist (2007) and Michael Medina (2010). On April 11, 1964, Lail was united in marriage to Marilyn Neuhardt at Resurrection Lutheran Church in South Minneapolis. Together they raised two boys, Tim and Tom, on the Bergquist family farm. In addition to taking over the dairy farm, they owned and operated Lakewood Campground. On June of 1990, Lail was united in marriage to Darlene (Faust) Firkus at the Gethsemane Lutheran Church in Dassel. They made their home on the farm and continued to operate the campground. Lail worked on the farm and ran the campground. After retiring from farming, he was employed by Smith Sanitation until his retirement. In retirement, he continued to devote his time to the campground. He enjoyed spending time with people. He always had time to say hello and have a conversation with friends and family. After the local coffee shop closed, Lail offered to have the men’s prayer group meet at his place, first in the shelter at the campground. As the weather cooled, the group moved to his “shed” where it continued even after Lail wasn’t able to join them. Lail was an avid collector of Farmall and International tractors. He enjoyed getting his collection out and parading around the campground to “burn out the carbon”. He was deeply fond of his grandchildren and great granddaughter. In his youth, Lail enjoyed spending time roller skating, dancing, snowmobiling, waterskiing, and ice fishing. Lail loved to tease and could always be counted on to have a joke ready. He is survived by his children, Tim (Laura) Bergquist of Wolsey, South Dakota, Tom (Amie) Bergquist of Dassel, Minnesota, grandchildren, Brent (Kacey) Bergquist, Brianna (John) Douglas, Brandon Bergquist, Brittany Bergquist, Ted Bergquist, Gus Bergquist and Abe Bergquist, and great granddaughter, Willow Bergquist, sister, Dolores Carlson of Grove City, step-children Rick (Kim) Firkus, Tammy (Gonzalo) Medina, Sue (Tim) Gilbertson, Nancy (Dave) Pettit, and Dave (Tina) Firkus, step-grandchildren, Tara Firkus Welch, Jodi (Jason) Houge, Jason (Melissa) Firkus, Kevin (Prairie) Firkus, Kara-Mia (Rick) Appleton, Michael Medina, Erik Gilbertson Jack Gilbertson, Hunter Pettit, Carter Pettit, Zach Firkus, step great-grandchildren, Alexa Welch, Logan Welch, Alizia Welch, Lucas Welch, Kennedy Houge, Simon Houge, Bauer Houge, Grace Appleton, Joy Appleton, Shayla Firkus, Amaya Firkus, Tyler Firkus, Caroline Firkus, Mason Firkus, Wyatt Medina, and Hannah Medina. He is also survived by brothers-in-law, Dan (Sheryl) Faust, and Denny Faust; and sisters-in-law, Jessie (Don) Kiser and Charene Faust. He is also survived by a nephew and five nieces and families. Preceded in death by his wives, Marilyn Bergquist on April 3, 1988, and Darlene Firkus Bergquist on October 20, 2011, parents, Theodore and Margaret Bergquist and brothers-in-law, Chuck Neuhardt, Jerome Carlson and Buford Faust, a nephew, Scott Neuhardt and faithful friend, Charlie.

Lail Dean Bergquist, age 84, of Dassel died Tuesday, January 7, 2020, at the Abbott Northwestern Hospital in Minneapolis. A funeral service will be held on Saturday, January 18, 2020, at 11:00 a.m. at the Gethsemane Lutheran Church in Dassel... View Obituary & Service Information

The family of Lail Dean Bergquist created this Life Tributes page to make it easy to share your memories.

Send flowers to the Bergquist family.