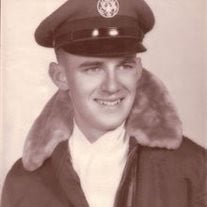 LaVerne "Vern" Wilfred Riebe, age 78, of Dassel, died Sunday, May 7, 2017, at the St. Cloud Hospital. A funeral service will be held on Saturday, May 13, 2017, at 2:00 p.m. at the Evangelical Covenant Church in Dassel with the Rev. Keith Carlson officiating. The interment will be held at the Dassel Community Cemetery following the service. A visitation will be held on Friday evening from 4:00 p.m. to 7:00 p.m. and on Saturday afternoon one hour prior to the service at the Evangelical Covenant Church in Dassel. The Johnson Funeral Home in Dassel is in charge of the funeral arrangements. LaVerne "Vern" Wilfred Riebe, the son of Wilfred and Lillie (Steck) Riebe, was born on March 31, 1939, in Grafton Township, Sibley County, Minnesota. LaVerne was baptized and later confirmed in the Christian faith. LaVerne graduated from the Litchfield High School in 1957. Upon graduating from high school, Vern was inducted into the United States Air Force where he served during the Cuban Missile Crises. Vern was united in marriage to Judy Nordlund at Winthrop, Minnesota. Together they made their home in Darwin and later Dassel. Vern had worked for numerous years as a Chief Operating Engineer at the Litchfield Power Plant. He later joined the local 49 union and helped build several Minnesota landmarks, the IDS building, the Mall of America, the Becker power plant and the Monticello Nuclear Power Plant. Vern had his pilot's license and was one of the founding members of the Litchfield Civil Air Patrol. He was an avid outdoors man who enjoyed deer hunting, fishing, was a member of the Darwin Rod and Gun Club, enjoyed competitive trap shooting at the Darwin Rod and Gun Club and Gopher Campfire in Hutchinson. He would often be found at garage sales and local flea markets looking to add to his fishing pole collection or his collection of watches and clocks. He loved his family dearly and enjoyed spending time with them for holidays and other special events. Vern is survived by his wife, Judy Riebe of Dassel, children, Bruce (Mary Beth) Riebe of Isanti, Minnesota, Caryn (Greg Pieske) Riebe of Big Lake, two grandchildren, Dana Riebe and Erik Riebe, two brothers, Harvey (Kattie) Riebe of Darwin and Steve Riebe of Darwin. He was preceded in death by his parents, three brothers, Duane Riebe, Donald "Butch" Riebe, and Dennis Riebe, and two sister-in-law, Terry Riebe, and Diane Riebe.

LaVerne "Vern" Wilfred Riebe, age 78, of Dassel, died Sunday, May 7, 2017, at the St. Cloud Hospital. A funeral service will be held on Saturday, May 13, 2017, at 2:00 p.m. at the Evangelical Covenant Church in Dassel with the Rev. Keith Carlson... View Obituary & Service Information

The family of LaVerne Vern Riebe created this Life Tributes page to make it easy to share your memories.

Send flowers to the Riebe family.