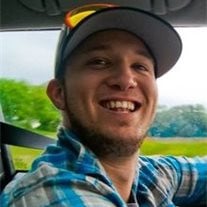 Kristofor Roy Robert Tanner, age 23, of Dassel, died Monday, September 30, 2013, just outside of Dassel. A celebration of life will be held at 10:00 a.m. on Saturday October 5, 2013, at the Cornerstone Church in Litchfield. Pastor Jeffrey Garland and Pastor Steven Stahl will officiate at the service. A time to gather with family will be held one hour prior to the service on Saturday at the Cornerstone Church in Litchfield. The Johnson Funeral Home in Dassel is in charge of services. Kristofor Tanner, the son of Bob and Sandy (Hubbell) Tanner, was born on October 12, 1989, at Mercy Hospital in Minneapolis. He grew up in the Dassel area and graduated from the Dassel Cokato High School in 2008, and then attended and graduated from Ridgewater College in 2009. Kristofor accepted Christ as his Savior as a young boy and was baptized as a teenager at the First Baptist Church in Cokato by Pastor Steve Stahl. Kristofor was a member of Sheepdogs, a band of men uniquely committed to following Jesus as his disciples. He loved to study God's word and was planning to work as adventure staff in a Christian camp setting. Kristofor was employed by Shadow Floor Coverings in Elk River as a supervisor for floor installation. He enjoyed spending time snowboarding, camping, skateboarding, rock climbing, repelling and disk golfing. He was a talented bike mechanic and built bikes in Jackson Hole, Wyoming. He enjoyed riding BMX bicycles, spending time with his best friend "Annie" his black Newfoundland. He was a great friend, son, brother, cousin and a gentleman, who would often be found drinking a cup of gourmet coffee or lending a hand to fix a friend's car, (all with a smile). He will be missed by his family and the many friends he leaves behind. He is survived by his parents, Bob and Sandy Tanner of Dassel, siblings, Paul Tanner of Dassel, Natasha Tanner and Taborah Tanner at Moody Bible Institute in Spokane, Washington, JT Tanner of Bellingham, Washington, maternal grandmother, Ginger Hubbell of Bemidji, and paternal grandparents, Bob and Judy Tanner of Darwin. He is also survived by numerous aunts, uncles, and cousins. He was preceded in death by his maternal grandfather, Roy Hubbell.

Kristofor Roy Robert Tanner, age 23, of Dassel, died Monday, September 30, 2013, just outside of Dassel. A celebration of life will be held at 10:00 a.m. on Saturday October 5, 2013, at the Cornerstone Church in Litchfield. Pastor Jeffrey Garland... View Obituary & Service Information

The family of Kristofor Roy Robert Tanner created this Life Tributes page to make it easy to share your memories.