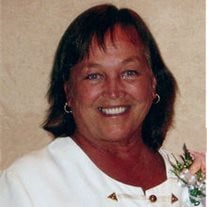 Kristina "Kristi" Dawn Taina, age 64, of Dassel, died Friday, April 28, 2017, at her home. A funeral service will be held on Saturday, May 6, 2017, at 4:00 p.m. at the Evangelical Covenant Church in Dassel with the Rev. Keith Carlson officiating. The interment will be held on a later date. A time to gather with the family will be held Friday evening, May 5, 2017, from 3:00 p.m. to 6:00 p.m. at the Johnson Funeral Home in Dassel and one hour prior to the service on Saturday at the Evangelical Covenant Church in Dassel. Kristina "Kristi" Dawn Taina, the daughter of Dale and Lila (Almquist) Cates was born on April 18, 1953, in Litchfield, Minnesota. Kristi grew up in Kingston and attended Kingston Elementary and in 1971, graduated from Litchfield High School. Kristi graduated from Ridgewater College in Hutchinson in 1993, with a degree in Metallurgy. She was baptized at the Kimball United Methodist Church and was confirmed at Redeemer Lutheran Church in Kingston. On February 5, 1972, Kristi was united in marriage to Robert Taina at the Crow River Lutheran Church in rural Cokato. Together they made their home in Kingston before they moved to Dassel in 1974. Kristi had been employed at HTI for ten years. After schooling she was employed at Medtronics for seven years before she retired. Kristi was the 1970 Litchfield High School Homecoming Queen. She loved holidays, especially Halloween and spending time with her family and friends camping and had spent many Memorial and Labor Day celebrations at the Cates Campground in Kingston. She enjoyed playing games, playing with and loving all her grandchildren, baking, and making salsa. She could often be found outside in her backyard enjoying nature, gardening and taking care of her flowers. She loved to take rides around the country side and had enjoyed the family vacations and camping trips. She loved life! Kristi is survived by her husband, Robert of Dassel, children, Heather (Gary) Turja of Kingston, Shane Taina of Dassel, Andy (Hiedi) Taina of Dassel, five grandchildren, Doug Potter, Lilly Turja, Stella Turja, Addison Stenmark and Carli Taina. Siblings, Kim (Maxine) Cates of Kingston, Mike (Julie) Cates of Kingston, Karen (Ron) Rasmussen of Kingston, Perry (Christine) Cates of Watkins, and sister in law, Jody Cates of Dassel along with a good friend, Mary Ring. She was preceded in death by her parents, Lila and Dale Cates, brother, Robin Cates, Nephew Paul Cates, and a great niece Kelly Rasmussen.

Kristina "Kristi" Dawn Taina, age 64, of Dassel, died Friday, April 28, 2017, at her home. A funeral service will be held on Saturday, May 6, 2017, at 4:00 p.m. at the Evangelical Covenant Church in Dassel with the Rev. Keith Carlson officiating.... View Obituary & Service Information

The family of Kristina Dawn Taina created this Life Tributes page to make it easy to share your memories.

Send flowers to the Taina family.