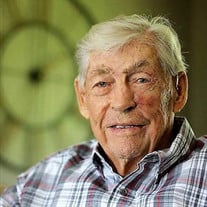 Kermit Jerome Swanson, 101 years young, of Collinwood Township, Dassel, Minnesota died on November 1, 2020, (All Saints Sunday) at the Augustana Lakeside Health Care Center of Dassel. A private graveside service will be held at the Dassel Community Cemetery with Rev. Paul Settergren and Rev. Javen Swanson officiating at the graveside Service. The Johnson Funeral Home of Dassel, Minnesota is in charge of the graveside service arrangements. Memorials are preferred to be sent to the Gethsemane Lutheran Church in Dassel or the Dassel Area Historical Society. Kermit was the son of Carl and Christine Swanson and was born on January 3, 1919 in Collinwood Township, Meeker County, Minnesota. He was raised and lived his life on the home place where he was born. He was a member of the Gethsemane Lutheran Church of Dassel. Kermit was a farmer and along with farming the land, he and his wife started and operated Swanson’s Started Pullets. Duty called and Kermit proudly served his country in the Army Air Corps during WWII. He became a glider pilot. He flew three missions: D-Day, Market Garden in Holland and Operation Varsity crossing the Rhine River near the end of the War. All three had terrifying moments. But as he said “any landing you can walk away from is a good landing”. He received a Purple Heart and three Air Medals. After his discharge he married Aileen Lois Nelson on June 21, 1947 and raised their family on the family farm. Kermit was a quiet humble man. Kermit is survived by his wife of 73 years, Aileen Swanson; daughter Beverly (Dave) Pearson of Dassel and a son Bradley (Joanie) Swanson of Pine River, Minnesota; grandchildren, Zachary (Kristin) Pearson, Paul (Kristin) Pearson, Briana Swanson, Lindsey (Brian) Bessingpas, Javen (Oby Ballinger) Swanson, and great-grandchildren: Payten, Reece, Karin, Hannah, Annika, Micah, Luke, Matthew and Andrew. He was preceded in death by his parents and his five siblings.

The family of Kermit Jerome Swanson created this Life Tributes page to make it easy to share your memories.