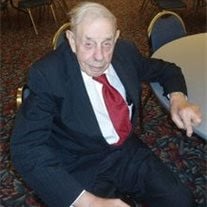 Kermit Earl Gustaf Erickson, age 101, Dassel, MN died Wednesday, October 26, 2016 at his home in Dassel Township. A memorial service will be held on Saturday, October 29, 2016 at 12:00 p.m. at the Evangelical Covenant Church in Dassel with the Rev. Keith Carlson officiating. Interment will be held at the Dassel Cemetery following the memorial service. A time to gather with the family will be held prior to the memorial service on October 29, 2016 from 11:00-12:00 p.m. at the Evangelical Covenant Church in Dassel. In lieu of flowers, the family prefers memorials to support missions. The Johnson Funeral Home in Dassel is in charge of the memorial arrangements. Kermit Earl Gustaf Erickson was born on December 25, 1914 at his home in Dassel, Minnesota to E. Gust and Sarah (Benson) Erickson. Kermit was the youngest of two children. When Kermit was 5, his father sold their home to his nephew, Philip Anderson (Kenny Anderson's father) and moved to the current farm in Dassel Township where Kermit lived the majority of his life. Kermit attended Dassel School and graduated from Dassel High School in 1933. He then farmed with his dad and took care of his parents until he was drafted by the army in 1942. He served stateside in Texas, Louisiana, and California until he was sent overseas to England and France where he was a medic during WWII. He was discharged from the army in 1946. After the war he returned to dairy farming in Dassel. Kermit started dating Charlotte Sill in September, 1954. They were married on February 5, 1955 at Fourth Baptist Church in Minneapolis. They made Dassel their home where Kermit continued farming until 1958 when they moved to Edina, Minnesota where Kermit was the caretaker of the Adath Yeshurun Cemetery for 14 years. He later returned to the Dassel farm in 1972 where he continued to raise a few animals, rent the fields, and was employed by Midwest Hatchery until he retired at the age of 85. Kermit also spent many years as the superintendent of the Dassel Cemetery. He lived at the farm until Charlotte's death in October, 2014. He then made his home in Hutchinson where he lived with his oldest daughter, Diane and her family. He enjoyed visits to the farm during the summer and other holiday occasions. Kermit was an active member of the Evangelical Covenant Church of Dassel for 88 years where he served as a deacon, taught Sunday School, sang in the choir, and served on countless committees. During his time in Edina, he was a member of Edina Baptist Church (now relocated to Eden Prairie and known as Grace Baptist Church) where he was also a deacon, served on the Board of Trustees, taught Sunday School, and sang in the choir. Kermit loved the Lord with all his heart and served the Lord all his years. Just like his wife, Charlotte, he had a heart for missions. He was a loyal and caring son to his mom and dad, a devoted and loving husband to Charlotte, and a doting father to his four daughters. Kermit enjoyed conversing and singing in Swedish, playing music on his hands, playing the harmonica, reading his Bible and reading anything having to do with history. He loved hot weather, working outside, camping, and fishing. He used to say that the perfect temperature was 100 degrees in the shade. He enjoyed "coffee time" each day and visiting with friends and family. Kermit is survived by his four children: Diane (Charles) Freitag of Hutchinson, MN; Karen (Mike) Powell of Sugar Land, TX; Janet (Kent) Scharmer of Hector, MN; and Becky (Jim) Decker of Green Bay, WI. Kermit was blessed with 12 grandchildren (Christine Huebener, Jonathan {Brenda} Huebener, Sarah Huebener, Joshua Huebener, Aaron {Rachel} Powell, Staci {Jonathan} Smith, Matthew {Hannah} Powell, Nathan {Kara} Scharmer, Karissa {Neal} Eaton, Cassie Scharmer, Andy Decker, and Bridget Decker), 1 step-grandson, 6 great grandchildren, 6 step-great grandchildren, and 2 step-great-great grandchildren who all loved him dearly. He was preceded in death by his wife, Charlotte Erickson, his parents, E. Gust and Sarah Erickson; one sister, Evelyn Johnson, one nephew, Wendell Johnson; one granddaughter, Catherine Huebener; and two great-grandsons, Gavin and Bennett Scharmer.

Kermit Earl Gustaf Erickson, age 101, Dassel, MN died Wednesday, October 26, 2016 at his home in Dassel Township. A memorial service will be held on Saturday, October 29, 2016 at 12:00 p.m. at the Evangelical Covenant Church in Dassel with the... View Obituary & Service Information

The family of Kermit Earl Gustaf Erickson created this Life Tributes page to make it easy to share your memories.