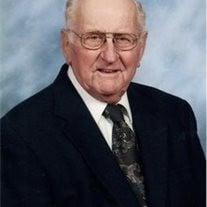 Kenneth W. Bergquist, 91, of Dassel, passed away May 9, 2017, at Harmony River Living Center in Hutchinson. Funeral services will be 11:00 a.m. Monday, May 15, at Gethsemane Lutheran Church, Dassel. Visitation will be Sunday afternoon from 3:00 p.m. to 6:00 p.m. at Johnson Funeral Home, Dassel, and one hour prior to the service on Monday. A Private burial will be at Steelesville Cemetery, rural Dassel, at a later date Military honors by the Dassel American Legion Paul F. Dille Post 364. In Lieu of Flowers donations are preferred to go to the Steelesville Cemetery. Kenneth William Bergquist was born October 7, 1925, on the family farm, Collinwood Township, rural Dassel, the son of August and Mary (Erickson) Bergquist. He attended Steelesville Country School and graduated from Dassel High School in 1943. He served in the United States Army during World War Il from 1944 to 1946 and was in combat in Germany and France. Kenneth was united in marriage to Alice Steinhilber on June 15, 1957, at Christ Lutheran Church, Glencoe. To this union 3 children were born. They resided on the home farm, built a new home and raised their family. Ken farmed, and in the early years worked on road construction. He then worked as a carpenter on crews with Paul Nelson and Lloyd Broberg. In 1965 and for the next 17 years, Ken was employed by Holm Bros. in Dassel as a flooring installer. He retired from farming in 1997. Ken was a lifelong member of Gethsemane Lutheran Church where he had been a past member of Brotherhood and choir. He enjoyed coffee and visiting with friends, bird-watching, fishing, gardening, and most of all, time spent with family. He was a keen observer of nature and enjoyed the change of seasons and life on the farm. A hi-light of his later years was a trip in 2010 to Washington D.C. on an Honor Flight with his daughter-in-law, Susan. Ken is survived by his daughter Carol (and Orlynn) Hegna, Granite Falls; sons Leslie (and Susan), Granite Falls; and Keith (and Rogene), St. Louis Park. Eight grandchildren: Hannah Bergquist, Liesl Bergquist, Anne (Doug) Zepeski, Karl Hegna, Amelia Bergquist, Peter Bergquist, Kayla Hegna, and William Bergquist; nieces, nephews and friends. He was preceded in death by his wife, Alice (2007), parents, brother Willard (Fern), sisters, Louise (Richard) Baldwin, Evelyn (Harold) Larson, nephew William Baldwin. Blessed be Kenneth's memory.

Kenneth W. Bergquist, 91, of Dassel, passed away May 9, 2017, at Harmony River Living Center in Hutchinson. Funeral services will be 11:00 a.m. Monday, May 15, at Gethsemane Lutheran Church, Dassel. Visitation will be Sunday afternoon from... View Obituary & Service Information

The family of Kenneth William Bergquist created this Life Tributes page to make it easy to share your memories.