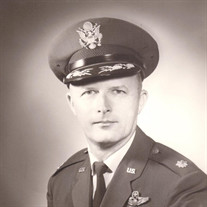 Kenneth LeRoy Skalberg, age 96, of Dassel, died Monday, June 29, 2020, at the Lakeside Apartments in Dassel. A private family funeral service will be held at 2:00 p.m. on Monday, July 6, 2020, at the Church of Christ in Dassel, with Dr. Tim Tomlinson officiating. The interment will be held following the service at the Dassel Community Cemetery with full military honors provided by the Paul F. Dille American Legion Post of Dassel and the flag presentation by the US Air Force Honor Guard. There will be a public visitation held at the Dassel Church of Christ from noon to 2:00 p.m. on Monday, July 6, 2020. The Johnson Funeral Home of Dassel is in charge of the funeral arrangements. In lieu of flowers, a memorial donation is preferred to be given to either the Paul F. Dille American Legion Post of Dassel or the Dassel Church of Christ. Kenneth LeRoy Skalberg, the son of Karl and Ruth (Oster) Skalberg, was born on March 14, 1924, in Collinwood Township, Meeker County, Minnesota. Ken grew up in the Dassel area where he was baptized. He was a lifelong member of the Dassel Church of Christ. He had served on the church board, as treasurer and a deacon. Ken graduated from Dassel High School in 1942. He continued his education by attending St. Cloud State where he graduated in 1971. Driven by his love for his country, on November 30, 1942, Ken was inducted into the United States Army Air Corps. He served his country during World War II as a fighter pilot until his discharge from the service on May 12, 1946. On June 11, 1946, Ken was united in marriage to LaRayne C. Roberts in Colorado. Together they made their home in the Dassel area where Ken owned and operated a television and radio repair business for several years. On November 1, 1952, Ken was reactivated into the United States Air Force and served his country during the Korean Conflict and the Vietnam War. On June 30, 1970, after proudly serving his country for 27 years 7 months and 1 day, Ken retired from the United States Air Force after attaining the rank of Lieutenant Colonel. Upon his discharge, Ken and LaRayne moved back to Dassel where they lived on the shores of Lake Washington where they became close to many wonderful neighbors. He was an active member of the Paul F. Dille American Legion Post in Dassel, having served in many leadership roles. He was a member of the Dassel Historical Society, the Civil Air Patrol, the Cokato Dassel Rotary Club, and had served on the Red Rooster Day Board. He was fond of water sports, he could often be found on Lake Washington water skiing, fishing, attending the breakfasts at the Rod and Gun Club and boating. He also enjoyed golf and was a long-term member of the Cokato Town & Country Club. He loved flying and had flown all around the country holding a private pilot license up until age 79. Ken loved to spend time with his family, he enjoyed his children and especially was proud of all his grandchildren and their accomplishments. He loved to get together with his family and especially enjoyed the annual 4th of July family picnic. He is survived by his children, Sandra K. Skalberg of Chestertown, Maryland, Wendy C. Cutting of Lincoln, Nebraska, Deanne S. (Ken) Heise of Bloomington, Minnesota, and Randall K. (Mary) Skalberg of Duluth, Minnesota, five grandchildren, Greg Cutting, Kim (Kevin) Atkinson, Brett Heise, Zach Heise and Jared Heise. He is also survived by his brother Gary A. (Nina) Skalberg, a 105-year old aunt, Helen C. Sanderson, along with many nieces, nephews, and other relatives. He was preceded in death by his wife, LaRayne, parents, Karl & Ruth Skalberg, siblings, Jeanette Tomlinson, Robert Skalberg, Ronald Skalberg, and Alan Skalberg.

Kenneth LeRoy Skalberg, age 96, of Dassel, died Monday, June 29, 2020, at the Lakeside Apartments in Dassel. A private family funeral service will be held at 2:00 p.m. on Monday, July 6, 2020, at the Church of Christ in Dassel, with Dr. Tim... View Obituary & Service Information

The family of Kenneth LeRoy Skalberg created this Life Tributes page to make it easy to share your memories.

Send flowers to the Skalberg family.