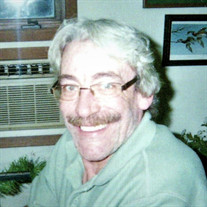 Kenneth Gregory (Kenny) Benson, Age 56, of Eden Valley, Minnesota, Kenny passed away quietly on Sunday, November 18, 2018, while at home in Eden Valley, Minnesota. His death came after a long illness. A memorial service will be held for Kenny on a later date in the spring at the Evangelical Covenant Church in Dassel. The family wishes to extend a sincere thank you to Pastor Keith Carlson and Ecumen Hospice for the wonderful care. Kenneth Gregory (Kenny) Benson, the son of Kenneth and Mary Alice (Kennedy) Benson, was born on August 15, 1962, in Minneapolis, Minnesota. Kenny had many friends in the restaurant and hospitality industry and had worked as a cook at the Speak Easy in Eden Valley and Dino’s on Eden Lake. He was a gifted athlete and enjoyed football, hockey, fishing and especially golf. He spent 21 years with his fiancé, Lynn. Together they made their home in Minneapolis, Dassel, and in 2011 they moved to Eden Valley. Kenny had helped raise Lynn’s three sons. Together they endured Kenny’s long fight with cancer. He is survived by father, Kenneth Benson and his wife (Lorraine), brothers, Rick and Doug and his wife (Kathy), sister, Terry and her husband (John) and his nieces and nephews, his fiancé, Lynn Jadinak. A special thanks to his friend, Dave Johnson and Stan Varland who was like his father in law to him. He was preceded in death by his mother, Mary Luhman. Kenny always dreamed of catching a big muskie—I hope there are big muskies in heaven.

The family of Kenneth Gregory Benson created this Life Tributes page to make it easy to share your memories.

Send flowers to the Benson family.