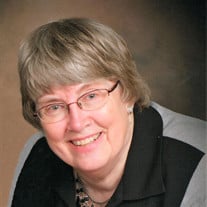 Karen Jean Anderson, age 76, of Dassel passed away peacefully surrounded by her family on August 29, 2019 at the Hutchinson Hospital. A funeral service will be held on Tuesday September 3, 2019, at 11:00 AM at Cokato Evangelical Lutheran Church with the Rev. Tim Wheatly and Rev. Wayne Peterson officiating at the service. The internment will be at the Dassel cemetery following the service. A visitation will be held on Monday from 5:00-7:00 p.m. at the Johnson Funeral home in Dassel and one hour prior to the service at the church. In lieu of flowers memorials preferred. Karen Jean Hurtig Anderson was born January 6, 1943 in Minneapolis, MN to Eb and Marian Hurtig. She was baptized and confirmed in the Lutheran church. She attended Lutheran Bible Institute in Golden Valley, MN to become a Church parish worker and took organ lessons. She graduated in 1963 and moved to Cokato to work at Evangelical Lutheran Church as the parish worker and organist. She left the parish worker job and did various other jobs including working at the State Bank of Cokato. She continued to play the organ for 53 years before retiring in 2016. Karen loved the Lord and her Cokato Church Family. In her years at the church she was involved in women’s organizations, Altar Guild, directing and accompanying choirs. Sunday School, youth work and singing in the choir. On August 13, 1966 she was married to J. David Anderson at First Lutheran Church in Hector, MN. They made their home in Dassel next to Spring Lake for 53 years together. She enjoyed playing the piano, reading, attending music concerts and listening to music. She held her family dear to her heart, especially her grandchildren, and attended many of their sporting events and other activities. Survivors include her husband J. David Anderson of Dassel, son Daniel (Trish) Anderson of St. Louis, MO, daughter Karyl (Jim) Schultz of Inver Grove Heights, MN, two grandchildren Brittany Schultz and Noah Schultz, as well as her sisters Judi Burson, Kathi (Doug) Last, Bette (John) Waltrip, nieces, nephews and many friends. She was proceeded in death by her parents Eb and Marian Hurtig, and Brother in law Paul Burson.

Karen Jean Anderson, age 76, of Dassel passed away peacefully surrounded by her family on August 29, 2019 at the Hutchinson Hospital. A funeral service will be held on Tuesday September 3, 2019, at 11:00 AM at Cokato Evangelical Lutheran Church... View Obituary & Service Information

The family of Karen Jean Anderson created this Life Tributes page to make it easy to share your memories.