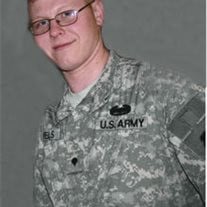 Kaleb Christopher Wells, age 31, of Kimball, formerly of Kingston, died Sunday, April 1, 2018, in Watkins, Minnesota. There will be a memorial service at 11:00 a.m. on Saturday, April 14, 2018, at the Johnson Funeral Home in Dassel. The interment will be held on a later date. A time to gather with the family will be held on Friday evening April 13, 2018, from 4:00 p.m. to 8:00 p.m. at the Johnson Funeral Home in Dassel. The United State Army Military Honor Guard will present the flag. Kaleb Christopher Wells, the son of Raymond and Laurie (Tchouban) Wells, was born on April 20, 1986, in Winsted, Minnesota. Kaleb was baptized and later confirmed at the Redeemer Lutheran Church in Kingston. Kaleb grew up in Kingston and attended the Litchfield Elementary and Middle school up through eighth grade before transferring to Dassel Cokato High School, he was crowned Prom King, and graduated in 2004. Kaleb was active in sports during high school, he was a member of the Dassel Cokato football and wrestling teams. As a teenager he had worked at the Dassel Bakery and Hojies Grill. Recently he had been employed by Barnor Technologies. Kaleb served in the United States National Guard from 2005 until 2007. He was called to Active Duty and served a tour in Iraq. He had a kind heart and loved to hunt, fish, play golf, and enjoyed traveling. He was a member of the Kimball American Legion post #261 and was the gambling manager. He had been a member of the Color Guard at Kimball Sporting events. He will be missed by his family and his many friends. He is survived by his daughter, Madison Wells of Glencoe, his parents, Raymond and Laurie Wells of Kingston, brothers, Zachariah (Ali) Wells of Sartell and their children, Henry and George Wells, Jacob (Jenofa) Byrne of Grand Bay Alabama, and their children, Dyson and Jaslynn Byrne, Grandma (Pritchard) Zummak of Litchfield, a special friend Stephanie Huston, and a friend of the family Kelli Schwartz (Madison mother). He was preceded in death by his brother, Luke Byrne, grandparents, aunts uncles and a cousins, Johnathon and Gina.

Kaleb Christopher Wells, age 31, of Kimball, formerly of Kingston, died Sunday, April 1, 2018, in Watkins, Minnesota. There will be a memorial service at 11:00 a.m. on Saturday, April 14, 2018, at the Johnson Funeral Home in Dassel. The interment... View Obituary & Service Information

The family of Kaleb Christopher Wells created this Life Tributes page to make it easy to share your memories.

Send flowers to the Wells family.