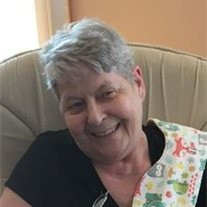 Joyce Emily Voight was born on January 9, 1955. She passed away on February 22nd, 2018 after a three year fight with lung cancer. She was at home surrounded by family. She was the fifth child of Robert and Ruby Voight of Kingston. As a child she attended school in Cokato, MN and was a lifelong member of Grace Lutheran Church in South Haven. Joyce had four children. Jason, Jesse, Jennifer and Jamie. She was married to Robert Mattson in 1975 and lived with him and their children in Braham until 1984 when they divorced. Joyce married again in 1985 and remained in the South Haven area until 1992 when she moved with her husband to Kelliher, MN. Joyce divorced again in 1995 and remained in the Kelliher area until she returned to South Haven/ Annandale in 2007. Joyce enjoyed singing music, especially Elvis and 'old' country. She also enjoyed sewing, making baby quilts, coffee and visiting with her family and friends. You were a stranger to her but once, and she would take you under her wing. She worked hard throughout her life in the service industry; as a cook, bartender and waitress in several restaurants and bars, as a cook and laundry worker at Cokato Manor and Annandale Care center and most recently at Walmart in Buffalo in the produce department. Joyce was known for her quick wit, her hardy laugh and her cooking. She always said, "I love you" to her children, grandchildren, family and friends, every time they would leave, after their visit. Each person was so "special" to her. Joyce will be missed and remembered with love. Her smile and her tell it like it is style held up until the end. Joyce is preceded in death by her parents Robert and Ruby Voight and daughter in law Tammy Voight. She is survived by her siblings: Ione (Vergil) Marquardt, Carol (Jerry) Becker, Bernice Helm, Robert (Dinah) Voight, her children: Jason Voight, Jesse (Jackie) Voight, Jennifer (Fred) Lundin, Jamie Mattson and grandchildren: Melanie (Cory) Handshoe, Nathan (Tiffany) Boesen, Crystal (Tim) Kuebelbeck, Lily Voight & Morgan Voight, and great- grandchildren: Trevor & Bryce Handshoe, Olive & Harvey Boesen, Haley, Jacob & Carter Kuebelbeck and several nieces, nephews, great nieces and nephews and friends. Thank you to Johnson Funeral Home of Dassel for arranging the cremation services. A memorial service and visitation will be held on March 11, at Grace Lutheran Church of South Haven. Visitation from 12-1 and service at 1. Pastor Eileen will be officiating. Interment will be held at a later date.

Joyce Emily Voight was born on January 9, 1955. She passed away on February 22nd, 2018 after a three year fight with lung cancer. She was at home surrounded by family. She was the fifth child of Robert and Ruby Voight of Kingston. As a child... View Obituary & Service Information

The family of Joyce Emily Voight created this Life Tributes page to make it easy to share your memories.

Send flowers to the Voight family.