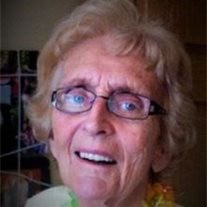 Joyce Mary Olsen (Hardy) Eggleston, age 88, of Long Prairie, formerly of Litchfield and Dassel, died July 5, 2017, in Long Prairie. A memorial service will be held on Saturday, July 15, 2017, at 11:00 a.m. at the Gethsemane Lutheran Church in Dassel with the Rev. Carolyn Pflibsen officiating. An interment of the urn will be held on a later date at the Dassel Community Cemetery. There will be an hour visitation prior to the service at the Gethsemane Lutheran Church in Dassel on Saturday. In lieu of flowers memorial are preferred to be sent to the Humane Society. Joyce Mary Olsen (Hardy) Eggleston, the daughter of Harry and Irene (Bryant) Olsen, was born on October 6, 1928, in Madison, Minnesota. In 1929, the family moved to Belgrade where they lived on a farm during the Depression years. In 1939, the family moved to Dassel where she grew up and graduated from Dassel High School in 1946. She then attended St. Cloud University where she received her teaching degree in 1950. Joyce was united in marriage to Jack Hardy on July 31, 1949, at the Gethsemane Lutheran Church in Dassel. Joyce began her teaching career by teaching 2nd grade in Belgrade, Minnesota. Joyce and Jack move to Dassel in 1950, where she taught Kindergarten at the Dassel Elementary and retired in 1985 after 34 years of teaching. Joyce was a dedicated educator who loved teaching the children in her care. She believed in education and had continued her schooling by receiving her Masters of Education. On August 1, 1982, Joyce was united in marriage to Wallace Eggleston. Together they made their home in Litchfield. They enjoyed traveling to many different places around the country. She was a master gardener and had planted her front yard in a vibrant array of colorful flowers and plants. Joyce had been a member of Gethsemane Lutheran Church in Dassel for over 40 years. She loved music and was an avid pianist and sang in the Gethsemane Lutheran Church Choir. She had also served as a member on the Gethsemane Church Council. She enjoyed outdoor activities, taking car trips with her children and enjoyed playing tennis, cross country skiing, and going for walks with her dog "Chloe". Joyce was dedicated to her kids and they always had a fondness for her in their hearts. She is survived by her daughter, Julie (Peter) Warnes of Alexandria, four grandchildren, Kerry (John) Beoletto, Jack (Krissy) Taff, Charles (Valerie) Warnes and Jolynn Warnes, six great grandchildren, Jonas and Isabella Beoletto, Jace Kelly and Trevor Taff, and Elijah and Gabriel Warnes, and a sister, Audrey Lovell of California. Joyce was preceded in death by her husband, Jack in November of 1977, and Wallace in August of 2000, her children, Jay Hardy on May 21, 2014, and Jill Taff on August 31, 2015, her parents, brother, Harry Jr. Olsen, and a half-brother, Frank "Olsen" Eicher.

Joyce Mary Olsen (Hardy) Eggleston, age 88, of Long Prairie, formerly of Litchfield and Dassel, died July 5, 2017, in Long Prairie. A memorial service will be held on Saturday, July 15, 2017, at 11:00 a.m. at the Gethsemane Lutheran Church in... View Obituary & Service Information

The family of Joyce Mary Olsen Hardy Eggleston created this Life Tributes page to make it easy to share your memories.