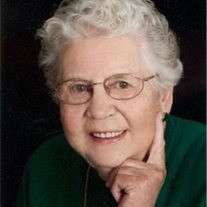 Josie Ann Martens, 84, of rural Hutchinson, passed away peacefully on January 19, 2015, at the Augustana Lakeside Health Care Center of Dassel. A funeral service will be held on Saturday, January 24th, 2015, at 11:00 a.m. at St. Peters Evangelical Lutheran Church, rural Darwin with the Rev. Greg Tobison officiating. The interment will be held following the service at the Ellsworth Cemetery in rural Darwin. A visitation will be held from 4:00 p.m. to 7:00 p.m. on Friday evening at the Johnson Funeral Home in Dassel with a one hour visitation prior to the service at St. Peters Evangelical Lutheran Church in Darwin. Josie Ann Martens was born on December 17, 1930, to Carl and Lily Swenson in Atwater, MN. After graduating from Atwater High School in 1948, she lived and worked as a waitress at the Litchfield Hotel. In 1950, she moved to Seattle, WA to work in a department store. She was united in marriage to Ward C. Martens on June 16, 1951, in California. They returned to Minnesota in 1957, and Josie enjoyed working in the fields on their 80-acre farm on Belle Lake. She also enjoyed following her children's sports seasons, attending as many games as possible, and playing card games with friends and family. In her later years, she loved watching the University of Minnesota Gopher games, the Vikings, and the Twins, as well as attending her grandchildren's various events and activities. She took pride in keeping the acreage site manicured and could be seen on her John Deere lawn mower throughout the summer. She was member of St. Peters Lutheran Church in Ellsworth Township and taught Sunday school for many years. Josie suffered a stroke in December 2012, and thereafter resided at Dassel Lakeside Heath Care Center. She is survived by her son, David Martens of Hutchinson, MN; son, Randall (Carole) Martens of St. Croix Falls, WI; son, Steven (Debbie) Martens of Dalton, MN; daughter, Sally (Richard) Shermock of Mankato, MN; son, Paul Martens of Minneapolis, MN; brother, John Swenson of Lino Lakes, MN; sisters-in-law, Mary Jane Swenson of Paynesville, MN, Aldys Swenson of Atwater, MN, and Blanche West of Atwater, MN; 10 grandchildren; and many nieces and nephews. She was preceded in death by her husband Ward, her parents, and brothers, Howard Swenson, Walter Swenson, and Donald Swenson.

Josie Ann Martens, 84, of rural Hutchinson, passed away peacefully on January 19, 2015, at the Augustana Lakeside Health Care Center of Dassel. A funeral service will be held on Saturday, January 24th, 2015, at 11:00 a.m. at St. Peters Evangelical... View Obituary & Service Information

The family of Josie Ann Martens created this Life Tributes page to make it easy to share your memories.

Send flowers to the Martens family.