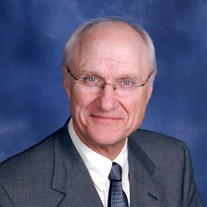 John Henry Sandstede, age 75, of Dassel, died Saturday, August 31, 2019, at his residence after a courageous 2 ½ year battle with cancer. A funeral service will be held on Saturday, September 7, 2019, at 11:00 a.m. at the Gethsemane Lutheran Church in Dassel with Rev. Laurie O'Shea and Rev. Keith Carlson officiating. Interment will take place at Swan Lake Cemetery in rural Dassel. There will be a visitation from 5:00 p.m. to 7:00 p.m. on Friday evening at the Johnson Funeral Home in Dassel and one hour prior to the service on Saturday at Gethsemane Lutheran Church in Dassel. In lieu of flowers, memorials are preferred to go to the Dassel Area Historical Society or Gethsemane Lutheran Church of Dassel. John, the son of Frank and Eleanor (Johnson) Sandstede, was born on December 2, 1943, in Sioux Falls, South Dakota. John grew up in Beaver Creek, Minnesota where he was baptized and attended elementary school. In 1950 the family moved to Dassel, where John graduated from High School in 1961. He was active in many sports and activities and life-long friendships were formed. John attended the University of Minnesota, graduating with a BS in Business in 1967. John was united in marriage to Joan Stueven in 1964 and they had two children: Stephanie and Jill. They lived in Minneapolis, Houston, TX, and St. Louis, MO before moving back to Minnesota in 1978. In 1997, John married Susan Johnson Krueger and welcomed the addition of two step-children, Sara and Pete to the family. John and Sue resided in Robbinsdale until they retired to Lake Washington in 2006. John was employed with Target Corporation for 39 years, starting in 1967 when Target only had 11 stores and retired in 2006. He was one of the first managers to open stores in the south. Throughout his years at Target, he recruited, hired, trained and mentored many employees. His strong work ethic, determination, and advocacy for his team earned John the respect and friendship of many colleagues. Throughout his life John had been involved with numerous community organizations, most recently with Dassel Area Historical Society, Dassel Rod and Gun Club, Red Rooster Committee, and the Lake Washington Association. He was an active member of Gethsemane Lutheran Church, serving as treasurer for the church council for many years as well as participating in several Bible studies and in the Lenten church dramas. John loved all sports, but especially the Minnesota Twins, Vikings, and DC Saints baseball. He was a dedicated U of M Gopher basketball fan and season ticket holder and was also a "Super Fan" of Dassel Cokato Charger athletics. He loved going to all his grandkids’ many sporting events and activities and could often be heard “coaching” from the sidelines. He also enjoyed outdoor activities all seasons of the year, especially fishing with his grandchildren, golfing, waterskiing, snowmobiling, downhill skiing, and hunting. He loved motorcycling with good friends and took many cross-country trips together. John will be remembered as a true and loyal friend, who had a genuine interest in the lives and well being of others, often taking time to listen and offer help or advice, or to share a story and a laugh. He was a deeply devoted father, loved his family, and was always there for guidance, support, and encouragement. He was playful with his grandkids, could always make them smile, and made every time spent together a special experience. He also challenged them to work hard and always do their best. John faced adversity with perseverance and courage and had a deep faith in God which was the guiding light of his life. We will miss him more than words can express but are comforted in knowing he is now with Jesus Christ our Lord and Savior. He is survived by his children, Stephanie (Christopher) Smith, and Jill (Jason) Wedel, step-children, Sara Krueger and her husband Jeff Olson, and Peter (Sheree) Krueger, nine grandchildren, Andrew and Joshua Smith, John and Luke Wedel, Maxwell, Grace, and Jack Olson, Megan and Tommy Krueger. He is also survived by his siblings, Georgia Rettman, Neal Sandstede, Robert Sandstede and his wife, Janet Valen, and brother-in-law Richard (Gail) Johnson. He is also survived by numerous nieces, nephews, cousins and other relatives. John was preceded in death by his wife, Susan on July 30, 2009, his parents Frank and Eleanor Sandstede, his mother-in-law Frances Johnson, brother-in-law Donald Rettman, brother-in-law Loren Stueven, and nephew Lucas Johnson.

John Henry Sandstede, age 75, of Dassel, died Saturday, August 31, 2019, at his residence after a courageous 2 ½ year battle with cancer. A funeral service will be held on Saturday, September 7, 2019, at 11:00 a.m. at the Gethsemane Lutheran... View Obituary & Service Information

The family of John Henry Sandstede created this Life Tributes page to make it easy to share your memories.

Send flowers to the Sandstede family.