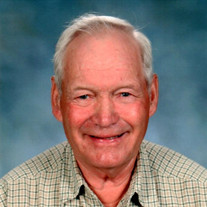 John Arthur Rokala, age 87, of Dassel, died Friday, March 8, 2019, at the Cokato Manor. A funeral service will be held on Tuesday, March 12, 2019, at 11:00 a.m. at the Good Shepherd Free Lutheran Church in Cokato with Rev. Rob Edwards officiating. The interment will be held at the Evangelical Lutheran Cemetery in Cokato following the service. A visitation will be held on Monday evening from 5:00 p.m. to 7:00 p.m. at the Good Shepherd Free Lutheran Church in Cokato and one hour prior to the service at the church on Tuesday. Military honors will be provided by the Johnson Kelly American Legion Post, Kingston, Minnesota. US Army Military Honor Squad will fold and present the flag. John Arthur Rokala, was born on May 3, 1931, to Levi and Ina (Hasti) Rokala at the General Hospital in Minneapolis. When John was young the family moved to Kingston, where he attended Kingston District #1 for his elementary schooling and graduated from the Dassel High School in 1949. John entered the United States Army where he served for two years from 1955 until 1957. On January 10, 1959, John was united in marriage to Maxine Klammer at the Evangelical Lutheran Church in Cokato. Together they lived in Minneapolis where John was employed at Gopher Stone and Wrecking until they moved to Cokato and was employed at DeKalb Hatchery. He was also employed in St. Cloud until they moved to the Rokala family farm in 1965. They had four children, Mark, Michael, Jodi and Jill. He loved playing baseball, reading, and farming. He was loved by all the children on his bus route and always would receive a hearty hello or bye when he picked them up and dropped them off. He loved his family dearly and enjoyed the times that they spent together. He will be missed by his family and his many friends. He is survived by his wife, Maxine Rokala of Dassel, children, Mark (Julie) Rokala of Washington D. C., Michael Rokala of Satellite Beach, Florida, Jodi (Alaa) Ghazi of Damascus, Syria; eight grandchildren, Danyah Ghazi, Kenan Ghazi, Maya Ghazi, Kassim Ghazi, Lea Ghazi, Henry Rokala, Lillian Rokala and Andrew Rygwall, siblings, Maryann Harkman of Cokato, Audrey (Ron) Peterson of Green Valley, Arizona, Carl (Beverly) Rokala of Dassel, and Margaret Mattila of Brainerd. He is also survived by a sister-in-law, Lucy Rokala of Litchfield and numerous nieces, nephews and other relatives. He was preceded in death by his daughter, Jill Rygwall, son-in-law, Chad Rygwall, parents, Levi and Ina Rokala, sister, Ruth Janckila, brother Milton “Bud” Rokala, brothers-in-law, Harlan Harkman, and Curt Mattila.

The family of John Arthur Rokala created this Life Tributes page to make it easy to share your memories.

Send flowers to the Rokala family.