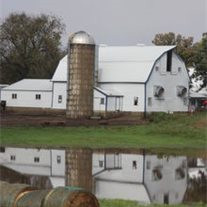 John Theodore Isaacson, age 75, of Dassel, died Tuesday, April 17, 2018, at his home. A funeral service will be held on Monday, April 23, 2018, at 11:00 a.m. at the Gethsemane Lutheran Church in Dassel, with Pastor Laurie O'Shea officiating. The interment will be held at the Dassel Cemetery following the service. A visitation will be held on Sunday afternoon from 3:00-6:00 at the Johnson Funeral Home in Dassel. There will be a one-hour visitation prior to the service on Monday at Gethsemane Lutheran Church. John Theodore Isaacson, the son of Vernon Hamlin and Virginia Marie (Johnson) Isaacson, was born on December 1, 1942, at Meeker County Memorial Hospital, Litchfield. John was a lifetime member of Gethsemane Lutheran. He was baptized, confirmed, and married there. As a child, John loved being a part of farm life. He cherished animals and the land. Side by side with his parents, he helped with chores, milking, and the fieldwork. While attending school, he was involved in FFA, tumbling, school plays and played the accordion. John graduated from Dassel High School in 1960. On December 10, 1966, John was united in marriage to Patsy Vehanen. Together they made their home on the family farm, which became a Century Farm in 1997. They had recently celebrated 51 years of marriage. They enjoyed traveling with family and friends. In his seventy-five years, John had many animals: cows, pigs, sheep, chickens, horses, and always at least one loyal companion, his dog. He loved animals and they loved him! He was a hard worker who was proud to be a dairy and crop farmer. The Isaacsons were named Meeker County Farm Family of the Year in 2003. He also served on Gethsemane Lutheran council, Land O Lakes District Board, Meeker County Farm Bureau Board, American Dairy Association Board, and Dassel Co-op Creamery Board. John loved history, reading, collecting vintage tractors, and a Sunday afternoon drive. John adored his family and really enjoyed the time they spent together. There has never been a Christmas Eve that all his family did not celebrate together. Attending church, sharing dinner, music and watching children open gifts were all part of the tradition. In recent years, his grandchildren brought fun and joy. He took them on countless tractor rides, and if you caught him working in the field, most likely he would be in the cab with a child and his dog, Buddy. John would not miss a birthday, family event or a cup of coffee. Speaking of, his coffee pot was always on. He enjoyed going out for coffee and pie with his friends. He will be missed by his family and his many friends. John is survived by his wife, Patsy; children: Sarah (Colin) Graham of Eden Prairie, Susan (Bradley) Isaacson Zimney of Minnetonka, Christine (Owen) Schott of Minnetonka, and David (Rochelle) Isaacson of Dassel; ten grandchildren: William, Annika, Benjamin, Vivian, Bo, Caleb, Virginia, Emil, Margaret and Mildred. He was preceded in death by his parents, Vernon and Virginia; his brother, Harlan, and his infant sister.

John Theodore Isaacson, age 75, of Dassel, died Tuesday, April 17, 2018, at his home. A funeral service will be held on Monday, April 23, 2018, at 11:00 a.m. at the Gethsemane Lutheran Church in Dassel, with Pastor Laurie O'Shea officiating.... View Obituary & Service Information

The family of John Theodore Isaacson created this Life Tributes page to make it easy to share your memories.