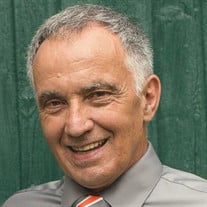 (John) Steve Davison, 71, of Dassel, returned to his heavenly home on October 15, 2018. His belief in Jesus Christ and love for his family supported him during his illness and gave him peace. A funeral service will be held on Friday, October 19, 2018, at 11:00 a.m. at Cornerstone Church in Litchfield with the interment at the Swan Lake Cemetery in rural Dassel. There will be a visitation on Thursday evening from 5:00 p.m. to 8:00 p.m. at the Johnson Funeral Home in Dassel and one hour prior to the service at the church on Friday morning. The son of Pearl (Wuolo) and Wayne Davison, a homemaker and steel worker, Steve was born on December 2, 1946. Steve grew up in Waukegan, Illinois and graduated from Waukegan High School in 1964. He married Mary Juusola on December 16, 1967. They resided in Hubbell, Michigan while he finished his B.S. in Business Administration at Michigan Tech in 1968. After his graduation, they moved to Southfield, Michigan where Steve started his career at General Motors. He earned his MBA in Finance from the University of Detroit in 1971. Steve worked in industrial management for the next decade. In 1975, Steve and Mary moved to Minnesota. Steve joined Farm Bureau as an insurance agent in 1978. In time, he started his own agency which he continued until retiring on October 1, 2018. Steve particularly enjoyed being his own boss, getting to know his clients, and conversations with his morning coffee group. At every opportunity Steve traveled with his family. They spent many summer vacations camping at Black River Falls with Steve’s siblings, nieces, and nephews. On his favorite trip, he flew to Daytona Beach, Florida in 2017 with his wife, kids, and grandkids to celebrate his 50th Wedding Anniversary. Steve enjoyed boating and went slalom waterskiing every summer until the age of 70. He enjoyed fall trips to the hunting shack where he served as the camp cook and taught his grandsons how to shoot, as well as how to mount chipmunk tails upon request. Steve relished chatting with anyone and everyone. He enthusiastically shared stories with friends and strangers alike. He was always interested in other people and his zeal for life made him a lively conversation partner. Everyone who knew Steve saw how passionately he loved his family. All who spoke with him were sure to hear stories about the latest adventures of his kids and grandkids. He loved to plan family gatherings, making certain that everyone was enjoying themselves. Steve delighted in his 99 nieces and nephews and treasured the time he spent with them. Steve is survived by his wife Mary, his children Carmen (Steve) Ylitalo, Wade (Nina) Davison, Megan (Jim) Koski, Rhea Davison, and Cassie (Kyle) Davison Bair, and his thirteen grandchildren, Doran, Jed, Graham, Tessa and Lia Ylitalo, Cadence, Emma and Belle Davison, Miles, Marina, Simon and Spencer Koski, and Ira Davison Bair. He is also survived by his siblings, Rea (Allan) Torola, sister-in-law Ruth Davison, Dave (Margaret) Davison, Kati (Richie) Pennala, Jeanne (Bob) Pelli, Becky Davison and Danny (Linda) Davison and numerous nieces and nephews. He was proceeded in death by his parents and his brother, Bill Davison.

(John) Steve Davison, 71, of Dassel, returned to his heavenly home on October 15, 2018. His belief in Jesus Christ and love for his family supported him during his illness and gave him peace. A funeral service will be held on Friday, October... View Obituary & Service Information

The family of (John) Steve Davison created this Life Tributes page to make it easy to share your memories.

(John) Steve Davison, 71, of Dassel, returned to his heavenly...

Send flowers to the Davison family.