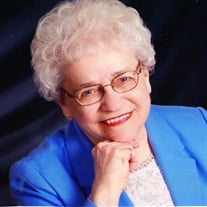 Joan Corinne Benson, age 89 of Dassel died Sunday, December 30, 2018, at the Augustana Lakeside Health Care Center of Dassel. A funeral service will be held at 11:00 a.m. on Friday, January 4, 2019, at the Gethsemane Lutheran Church with Rev. Laurie O’Shea officiating. The interment will be held at the Dassel Community Cemetery. A visitation will be held on Thursday evening from 4:00 p.m. to 7:00 p.m. at the Johnson Funeral Home in Dassel. There will be a one-hour visitation prior to the service on Friday at the church. Joan Corinne (Hardy) Benson, the daughter of Clifford and Eva (Clement) Hardy, was born on September 9, 1929, in Dassel, Minnesota. Joan was baptized and confirmed at Trinity Episcopal Church in Litchfield. She grew up in Dassel and graduated from Dassel High School in 1947. On June 28, 1947, Joan was united in marriage to Leslie Benson at the Trinity Episcopal Church in Litchfield. Together they made their home on a farm south of Dassel where they raised their four children. Joan was employed at 3-M in Hutchinson for several years. She was also employed as a hostess and waitress at the Prairie House restaurant and Hojies restaurant in Dassel for numerous years. In 1992, Joan and Les moved into town where she had resided until moving to Lakeside Apartments and Nursing Home. Joan was an active member of the Gethsemane Lutheran Church where she sang in the church choir, was on the Altar Guild, involved in the Christian Women’s group and taught Sunday school for numerous years. She was also an active leader of the local senior citizens group, WELCA and TOPS. Over the years she was very involved in the community and volunteered to help whenever she could. She loved to spend time with her family for holidays and special events. She gathered her children together and the Benson Family Singers sang for numerous events and even recorded a compact disc of songs. She was very proud of her grandchildren and great grandchildren. She enjoyed spending time having coffee with friends and with the women from the Collinwood Club. She was an avid DC Saints fan and could often be found attending games during the summer. She is survived by her children, Bonnie Jo (Lowell) Baumetz of Hutchinson, Jon (Karen) Benson of Dassel, Scott (Joe Andrews) Benson of Minneapolis, Shari (Mark) Forsman of Dassel, seven grandchildren, Jason (YouJa) Baumetz, Jeni (Jeff) Hemingson, Jessica (Dave Griffin) Baumetz, Krista (Travis) Cook, Aaron (Megan) Benson, Kayla Jo (Ryan) Sigdahl, and Karsen (Kellyn) Forsman, eight great grandchildren, Kalea Baumetz, Makani Baumetz, Larson Hemingson, Alicia Hemingson, Ty Hemingson, Logan Cook, Brody Cook, and Benson Sigdahl. She is also survived by her sister, Betty Freeman of Annandale. She was preceded in death by her husband Les, her parents, and two brothers Jack Hardy and his wife, Joyce Hardy Eggleston, Duane Hardy and his wife Bonnie Hardy, and a brother-in-law, Lawrence Freeman.

Joan Corinne Benson, age 89 of Dassel died Sunday, December 30, 2018, at the Augustana Lakeside Health Care Center of Dassel. A funeral service will be held at 11:00 a.m. on Friday, January 4, 2019, at the Gethsemane Lutheran Church with Rev.... View Obituary & Service Information

The family of Joan Corinne Benson created this Life Tributes page to make it easy to share your memories.

Send flowers to the Benson family.