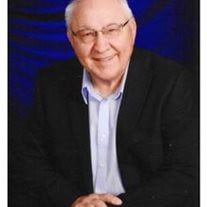 Jerome "Jerry" Richard Hirman, age 77, of Dassel, died Thursday evening at the Abbott Northwestern Hospital in Minneapolis. A Mass of Christian Burial will be held on Tuesday at 11:00 a.m. at St. John's Catholic Church in Darwin with the interment at Gethsemane Cemetery in New Hope. A visitation will be held on Monday evening, from 4:00 p.m. to 7:00 p.m. with parish prayers at 7:00 p.m. at Johnson Funeral Home in Dassel. There will be a one-hour visitation prior to the service at the church on Tuesday. Jerome "Jerry" Richard Hirman, the son of Elroy and Rose (Kotzenmacher) Hirman, was born on March 23, 1940, in Raymond, Minnesota. He grew up in the Raymond area and graduated from Raymond High School in 1958. Jerry where he was baptized and confirmed in the Catholic faith and was a faithful member of St. John's Catholic Church in Darwin at the time of his death. He was a kind and generous man who always lent a hand at church. On July 9, 1960, Jerry was united in marriage to Patricia Ann Peterson at Saint Andrew Catholic Church in Granite Falls. Together they made their home in numerous places in the Twin Cities Suburban area. On August 12, 1994, Jerry was united in marriage to Lorrie Carufel at the Sacred Heart Catholic Church in Robbinsdale. Together they made their home in Plymouth until 2001, when they moved to a home on the shores of Collinwood Lake near Dassel. He owned and operated Hirman Construction for numerous years before becoming a commercial construction supervisor. For several years he had been employed by Honeywell in Minneapolis. He loved to play games, dominoes, and cards with family and friends. He was a master carpenter and built many toy chests for his grandchildren. He enjoyed listening to polka music and would always tune in to Wally Pickle and the Pickle Patch. Jerry and Lorrie spent many years wintering in Arizona. He was humble, loving, kind and generous, helping family anyway he could. He could often be found casting a line on Collinwood lake or in his shop working on a woodworking project or one of the many aggravation boards he had made over the years. He will be missed by his many friends and family. He is survived by his wife, Lorrie Hirman of Dassel, children, Debra (Kerry) Jackson of Maple Grove, Sandra (Dave) Mullenbach of Bloomington, Michele Adamich of Minnetonka, John (Heidi) Mooney Maple Grove, and Thomas (Karon) Mooney Crystal, 10 grandchildren, 14 great grandchildren, 4 brothers, Joseph (Ella) Hirman Boulder, Colorado, Bernard (Doris) Hirman of Elk River, Donald Hirman of Gold Canyon, Arizona, and James (Colleen) Hirman of Elk River. He was preceded in death by his son, Richard Jerome Hirman, step-son, Patrick Mooney, parents, Rose and Elroy Hirman, and a sister, Dorothy Brey.

Jerome "Jerry" Richard Hirman, age 77, of Dassel, died Thursday evening at the Abbott Northwestern Hospital in Minneapolis. A Mass of Christian Burial will be held on Tuesday at 11:00 a.m. at St. John's Catholic Church in Darwin with the interment... View Obituary & Service Information

The family of Jerome "Jerry" Richard Hirman created this Life Tributes page to make it easy to share your memories.