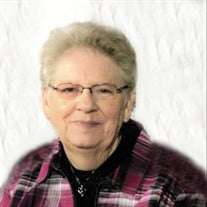 JeriLynne “Jeri” Margaret Johnson, age 75, of Dassel, passed away Sunday, August 2, 2020, at the Meeker Memorial Hospital in Litchfield after a courageous three-year battle with cancer. A private family funeral service will be held on Thursday, August 6, 2020, at 11:00 a.m. at the Church of Christ in Dassel with Mike Gerhardt officiating, with interment held at Oakland Cemetery in Hutchinson following the service. There will be a public visitation from 4:00 p.m. to 8:00 p.m. on Wednesday, August 5, 2020, at the Johnson Funeral Home in Dassel with a prayer service at 6:30 p.m. and from 10:00 a.m. to 11:00 a.m. at the Church of Christ in Dassel prior to the funeral. The Johnson Funeral Home in Dassel is in charge of the funeral arrangements. To protect everyone, we ask those who attend the visitation and the funeral service to wear a mask and use social distancing at the funeral home and the church. JeriLynne Margaret (Bodeker) Johnson, the daughter of Fay and Elsie (Parker) Bodeker, was born on May 23, 1945, at the Glenwood Community Hospital in Glenwood, Minnesota. She grew up in the Alexandria area before moving to Lake Lillian. She lived in Lake Lillian for several years before she moved to Annandale where she graduated from the Annandale High School in 1963. Jeri made her home in the Dassel area where she was employed by Functional Industries in Cokato and the Catholic Charities group homes in Dassel and Litchfield. She had also worked at Wessman Oil in Cokato. On November 30, 1991, Jeri was united in marriage to Howard G. Johnson at the Church of Christ in Dassel. Together they made their home in Dassel. Jeri loved spending time with her family and loved them dearly, she especially loved spending time with her grandchildren. She was a great cook and enjoyed baking bars for her family. She enjoyed scrap booking, jigsaw puzzles on her iPad and loved flowers. She looked forward to playing scrabble with her friends in her Thursday afternoon scrabble club, which they started in 2007. She was an avid collector of cookbooks, teapots, and dolls. She loved to travel to Florida to visit her sister Jo and loved following the Gaithers to various states. She especially enjoyed the holidays and special events that she could spend with her family. She is survived by her husband, Howard Johnson of Dassel, children, Shawn Johnson of Gibbon, Vanessa (Paul) Haekenkamp of Hutchinson and Aaron (Rachelle) Johnson of Hutchinson, grandchildren Jesse (Jenna), Valerie, Jamisen, Dreyten, Hendrix, Emery and Aria. Step-children, Grant (Tern) Johnson of Temple Terrace, Florida, Nancy (Bruce) Baumgart of Hutchinson, Todd (Tina) Johnson of St. Cloud, and Nichole (Greg) Plath of Hutchinson. Step grandchildren, Andria, Xavier (Sierra), Tyler, Stephanie (Josh), Andrea, Brittney (Travis), Benjamin, Zachary, Danielle, Alivia, Hayley (Anthony), Jayk, Adeline, Elise, Anna, Lila and twelve great grandchildren. Sister, Joan “Jo” Brink of St. Cloud, sisters in law, Sharon Bodeker of Minnetonka, and Kathleen Bodeker-Hull of St. Joseph. She is also survived by several nieces, nephews, and other relatives along with her special friends, Cindy and Shirley. She was preceded in death by her parents, Fay and Elsie Bodeker, her brothers, John and Jim Bodeker, nephews, Kelly and Barton Wold, mother and father in law, Harry and Frieda Johnson, sisters in law, Marion Johnson and Harriet Battles, brothers in law, Robert Brink and George Battles.

The family of JeriLynne "Jeri" Margaret Johnson created this Life Tributes page to make it easy to share your memories.