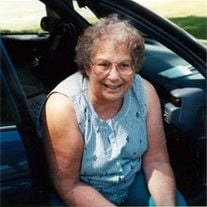 Jeraldine Marie Johnson, (Mrs. Herbert Johnson) age 85, of Dassel, passed away Saturday, August 17, 2013, at the Meeker Memorial Hospital in Litchfield. A Mass of Christian Burial will be held at 1:00 p.m. on Wednesday, August 21, 2013, at St. Philips Catholic Church in Litchfield with Fr. Brian Mandel officiating. The interment will be held at the Swan Lake Cemetery, in rural Dassel. There will be a visitation on Tuesday evening from 5:00 p.m. to 8:00 p.m. at the Johnson Funeral Home in Dassel and one hour prior to the service on Wednesday afternoon at the St. Philips Catholic Church in Litchfield. Jeraldine Marie "Housman" Johnson, the daughter of John and Viola (Peifer)Housman, was born on March 23, 1928, in rural Litchfield, Minnesota. She grew up in the Litchfield area and graduated from Litchfield High School before attending Normal Teachers Training in St. Cloud, Minnesota. After graduating from teachers training, she taught for eight years in rural schools and one year at the Mountain Iron School. Jeraldine was a longtime member of the St. John's Catholic Church in Darwin MN. She had been an active member of the CCW, volunteered at numerous church events, was a Christian Education teacher and served as Sunday School principal for several years. On June 9, 1956, Jeraldine was united in marriage to Herbert Johnson at the St. Philips Rectory in Litchfield. They shared 57 years of marriage built on pure love. Together they made their home in the Dassel area where they raised their 5 children, had a dairy farm and raised chickens. She had also been a Personal Care Assistant for several years. She enjoyed spending time with her family, and especially enjoyed her grandchildren and great grandchildren. She loved sewing, quilting, crossword puzzles, and reading. She had also been a member of a card club and a birthday club. She is survived by her husband, Herbert Johnson of Dassel, children, Jeffrey(Mary Jo) Johnson of Dassel, Joan Klehr of Wausau, Wisconsin, Janice(Jim)Maher of Darwin, Julie Johnson-Reeck of St. Paul, Jane (Troy) Bahr of Hutchinson, 18 grandchildren, Jeremy Johnson, Michelle Johnson, Malorie(Joshua) Kutil, Kathryn(David) Ster, Philip Klehr, David Klehr, Julie Ann Klehr, Benjamin Bahr, Mason Bahr, Gretchen (Eric) Sietsema, Dustin Morehouse, Christopher(Nyona) Morehouse, Heather(Travis) Daly, Ian Maher, Regan Reeck, Sebastian Reeck, Jonathan Reeck, Miles Reeck, and six great grandchildren: Sophia, Elizabeth, Annika, Bridgette, Madison, and Hunter. She is also survived by her brother, Milton "Bud" (Joyce) Housman of Litchfield, and her sisters, Phyllis Pollock of St. Michael, Kathleen Housman of Fridley, and sister in law, Hildur Carlson of Dassel. She was preceded in death by her parents, John and Viola Housman, sisters, Donna Housman, and Barb Chemlik, sons-in-law, Richard Reeck, and Robert Klehr, step-mother, Florence Housman and step-brother, Peter Hughes, along with numerous other relatives and loved ones.

Jeraldine Marie Johnson, (Mrs. Herbert Johnson) age 85, of Dassel, passed away Saturday, August 17, 2013, at the Meeker Memorial Hospital in Litchfield. A Mass of Christian Burial will be held at 1:00 p.m. on Wednesday, August 21, 2013, at St.... View Obituary & Service Information

The family of Jeraldine Johnson created this Life Tributes page to make it easy to share your memories.