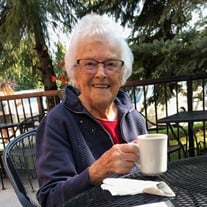 Jeanette Eileen Tomlinson, age 96, of Dassel, died Thursday, August 8, 2019, at Parmly on the Lake in Chisago City, Minnesota. A funeral service will be held on Thursday, August 15, 2019, at 1:00 p.m. at the Church of Christ in Dassel with the interment in the Dassel Community Cemetery. There will be a one-hour visitation prior to the funeral service on Thursday afternoon at the Church of Christ. Military honors provided by the Paul F. Dille American Legion Post, Dassel. The US Army Military Honor Squad will fold and present the flag. Jeanette Eileen Tomlinson, the daughter of Karl and Ruth (Oster) Skalberg, was born on June 7, 1923, in Dassel, Minnesota. She grew up in the Dassel area and was baptized and confirmed in the Christian faith and was a member of the Church of Christ in Dassel. Jeanette graduated in 1941 from the Dassel High School and after working in Minneapolis, joined the WACS during WWII. On July 31, 1945, Jeanette was united in marriage to Clyde Tomlinson in Washington, D.C. Following their discharge from the Armed Services, Jeanette and Clyde made their home in Minneapolis for a year before moving back to Dassel. To this marriage three children were born. After her children were raised, Jeanette was employed at Holm Brothers Hardware Store for several years. She then worked as a receptionist for Gordon Bengtson’s dental office, retiring in 1985. She enjoyed spending time with family and friends and always had coffee and a treat ready when they came to visit. She loved spending time outside, enjoying the beauty of nature. Music was an important part of Jeanette’s life and she could often be found playing the piano or organ. She had been the church organist for many years. She loved the Lord deeply and praised him in word, deed and song. She is survived by her children, Eileen (Rev. Charly) Dye of Wabash, Indiana, Gayle (Rev. Larry) Medcalfe of Indianapolis, Indiana, and Tim (Anita) Tomlinson of Blaine, Minnesota; along with six grandchildren, Chad and Luke Medcalfe, Jeremy, Jeff, and Emily (Morris) Dye, and Karyn Tomlinson; ten great grandchildren; and her siblings, Ken Skalberg of Dassel, Alan Skalberg of Dassel, and Gary Skalberg of Chanhassen. She was preceded in death by her husband Clyde, her parents, Karl and Ruth Skalberg, and two brothers, Ron and Robert Skalberg.

Jeanette Eileen Tomlinson, age 96, of Dassel, died Thursday, August 8, 2019, at Parmly on the Lake in Chisago City, Minnesota. A funeral service will be held on Thursday, August 15, 2019, at 1:00 p.m. at the Church of Christ in Dassel with... View Obituary & Service Information

The family of Jeanette Eileen Tomlinson created this Life Tributes page to make it easy to share your memories.

Send flowers to the Tomlinson family.