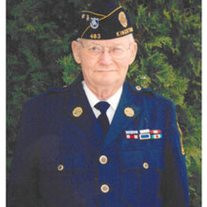 James Leroy Myllykangas, age 86, of Litchfield, formerly of Kingston, died Friday, March 30, 2018, at the St. Cloud Hospital. A funeral service will be held Tuesday, April 3, 2018, at 5:00 p.m. at the Johnson Funeral Home in Dassel with Pastor Orval Wirkkala officiating. Visitation will be prior to the service from 3:00 p.m. to 5:00 p.m. Interment will be at the Apostolic Lutheran Cemetery in Kingston after the service. Supper will be provided by the Kingston American Legion, as well as dessert provided by the Apostolic Lutheran Church at their Church following the interment. Military Honors will be provided by the Kingston American Legion with the presentation of the flag by the United States Army Honor Squad. James Leroy Myllykangas, the son of David and Evelyn (Johnson) Myllykangas, was born on June 15, 1931, in Kingston, Minnesota. He grew up on the family farm helping with chores. He was baptized in the Christian faith. He attended country school for his education. James was inducted into the United States Army and served in Korea for 18 months during the Korean War. Jim was awarded two Bronze Star Medals for bravery along with many others. He was proud of his service to his country and was a founding member of the Kingston American Legion. He honored many servicemen by serving on the funeral rifle squad. He also marched in many parades. After his stint in the service, Jim returned to the Kingston area where he worked as a heavy equipment operator. He was a proud 49-years-long member of 'The 49ers'! Jim worked on Interstate 94, 494, and 694 among many other road construction projects - which he never failed to point out along the way! On April 4, 1959, James was united in marriage to Vera Vogelpohl in Eden Valley. They made their home in Kingston. For many years though, they moved around and went wherever Jim's road construction job would take them. In 1963, Jim and Vera moved back to the Kingston area. Jim's oldest son, Dave, farmed with his Dad until Jim's retirement. However, Jim never stopped being a farmer! He could often be found sitting in his truck at the end of a field 'supervising'. Jim loved to go to farm auctions. He had an impressive collection of old chainsaws. Jim especially liked the Waverly IA Draft Horse Sale where he'd run into all his draft horse buddies! He would pick up old horse-drawn bobsleds and remove the decayed wood from the runners to make new sleds employing the technique of boiling water to bend the wood. Bill and Helen received one for their wedding present. For fun, he designed and constructed a 'Bobber'. It was a cross between a bobsled and a cutter. In his younger years, Jim had enjoyed raising and breeding Arab – Welsh crosses. In the early 80's, Jim and his youngest son, Bill, bought their first team of Belgian geldings, Butch and Barney. He loved his family and was always eager to hear about his grandchildren's accomplishments, especially Laura and Katy's dressage horse competitions. He will be missed by his family and friends. He is survived by his son, Bill (Helen) Myllykangas of South Haven, daughter-in-law, Nancy Myllykangas of South Haven, brother, Chuck Myllykangas of Hutchinson, four grandchildren, Laura (Nick) Myllykangas Wittrock, Katy Myllykangas, Janelle Vogel and Jeremy (Jenelyn) Vogel, two great grandchildren, Jagger and Jaxen Vogel and his very special 'lady friend', Carol Tenney, of Kimball. He is also survived by several nieces, nephews, cousins, other relatives, and many friends. He was preceded in death by his wife, Vera, parents, David and Evelyn, son, David Myllykangas on March 21, 2018, brothers and sisters-in-law, Gordy and Lillian Myllykangas, Bob and Gen Myllykangas and Faye Myllykangas.

James Leroy Myllykangas, age 86, of Litchfield, formerly of Kingston, died Friday, March 30, 2018, at the St. Cloud Hospital. A funeral service will be held Tuesday, April 3, 2018, at 5:00 p.m. at the Johnson Funeral Home in Dassel with Pastor... View Obituary & Service Information

The family of James Leroy Myllykangas created this Life Tributes page to make it easy to share your memories.