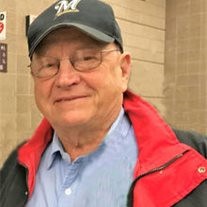 James Robert Miller, age 76, of Dassel died Wednesday August 17, 2017, at the Augustana Lakeside Health Care Center of Dassel. A funeral service will be held on Monday, August 21, 2017, at 11:00 am at the Gethsemane Lutheran Church in Dassel with the Rev. Laurie O'Shea officiating. The interment will be held at the Steelesville Cemetery in rural Dassel. There will be a visitation on Sunday evening from 4:00 pm to 7:00 pm at the Johnson Funeral Home in Dassel. There will be a one-hour visitation on Monday morning at the church. James Robert Miller, the son of Ambrose and Margaret (Chekal) Miller was born on April 13, 1941, in Hutchinson, Minnesota. James was lifetime member of Gethsemane Lutheran Church where he was baptized and later confirmed. James grew up helping with field work and farm chores. He attended Dassel High School and graduated in 1959. Upon graduating from high school, he continued to work on the family farm. On August 11, 1962, James was united in marriage to Sharon Bratz at the Gethsemane Lutheran Church in Dassel. Together they lived and farmed on the original Miller family Homestead and farmed near Dassel his whole life. Farming was one love of his life along with his family and friends. He enjoyed some travel but always was anxious to get home to check on the farming operation. He loved his family was his life, he would often be found cheering on his grandchildren at their events from sporting events to choir concerts and plays, he enjoyed watching his grandchildren meet many milestones growing up. He was a member of the Lions Club and a member of the Maple Lake Cenex Board. Jim and Sharon had just celebrated their 55th wedding anniversary. He was very proud of his children and grandchildren. He will be missed by his many family and friends. He is survived by his wife, Sharon Miller of Dassel, son, Daniel (Jennifer) Miller of Dassel, daughter-in-law, Cindy Miller of Dassel, seven grandchildren, Holton Miller, Shelby Miller, Gannon Miller, Gina Miller, Peyton Miller, James Miller and Mac Miller, two step-grandchildren, Marilyn Saulsbury and Mathis Saulsbury. He is also survived by a niece, Kimberly (Joe) Deutch of Roseville and a nephew Kurt (Barb) Shimek of St. Paul. He was preceded in death by his parents, his son, Torey Miller and a sister, Kate Clark and a brother-in-law, Ray Clark.

James Robert Miller, age 76, of Dassel died Wednesday August 17, 2017, at the Augustana Lakeside Health Care Center of Dassel. A funeral service will be held on Monday, August 21, 2017, at 11:00 am at the Gethsemane Lutheran Church in Dassel... View Obituary & Service Information

The family of James Robert Miller created this Life Tributes page to make it easy to share your memories.