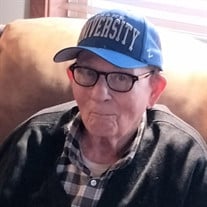 James Tex Haapala, age 85, of Dassel died Saturday, January 8, 2022, at Lakeside Generations in Dassel. A memorial service will be held on Saturday, January 22, 2022, at 11:00 a.m. at the Gethsemane Lutheran Church in Dassel with Rev. Janine Olson officiating. The interment of the urn will be held at the Dassel Community Cemetery at a later date. There will be a time to gather with the family one hour prior to the service on Saturday, January 22, 2022, at the Gethsemane Lutheran Church in Dassel. James Tex Haapala was born on June 15, 1936 to Bernard Haapala and Wincie Haapala of Dassel, MN. The first few months after birth, the newly founded family survived through one of the hottest summers in Minnesota history. In 1939, Tex developed a severe case of whooping cough and almost died. Tex could remember the beginning of WWII very vividly because many of his family members enlisted in the war: Bruce, John, Florence, Harold, Van, Bob Wayne, and many others. Some of his fondest childhood memories included Thanksgivings, birthdays, and Christmas’ at Grandpa and Grandma Haapala. One of those special memories was on his 6th birthday when his Grandpa Levi gave him his first bicycle. Another special memory pertaining to his childhood was every year on December 26th, he would go to his Grandpa and Grandma Anderson’s for his Grandpa’s birthday. Tex’ family, starting at a young age, meant everything to him and still was a near and dear topic to him, especially when it came to his brothers. He has many wonderful memories of each one of his brothers and could recall when all his brothers were born. David was born in 1937, Tom was born in 1942, and Nathan was born in 1950. Tex was confirmed in 1950 by Pastor Leaf. Between 1950-1954 the family moved to a new house after living in a small cabin on Washington Lake. He got a car during this time frame as well, but had to share it with his brother David, which started many fights which often lead to him running after his brother who was driving away with the car. In High School, he played football and basketball, but will be the first to admit that he wasn’t the best player. He graduated from Dassel-Cokato High School in 1954 and enrolled at Gustavus Adolphus right afterwards. From 1954-1959, Tex attended Gustavus Adolphus and did fairly well there with his studies. Then in 1955, he started at the University of Minnesota and took many chemistry, agronomy, pathology, soil, and many other classes that lead to his career in the seed corn business. While attending the University of Minnesota he joined a fraternity: AGR, and lived in the house for two years. He graduated from University of Minnesota in 1958, and began working at Levi Haapala & Sons. During his time at the University of Minnesota, in 1956 he met Pat Farrell. As he would describe her, “she was very cute and a nice girl.” Their first date consisted of them going to a movie together. On April 5, 1958, Tex and Pat got married, which was a very wonderful time for him, and they lived together in a small apartment by the university for two and a half months - rent was $10/week. Soon after a year full of wedded bliss, they welcomed their first child, and I quote, “a very beautiful girl,” Deborah Ann Haapala entered the world on March 15, 1959. A few years later, they had their second child, Jonathan James Haapala, during one of the worst snowstorms in that century on March 18, 1965. 1959-1968 he worked at Haapala Seed as an agronomist. He started going to Williamsburg, IA - Holden Field Days and MBS in Ames, IA and many other events. He worked on a research plot. The foundation seed fields were planted, hoed, detasseled, harvested, bagged, dried, shelled, graded, treated, set up for seed fields, and all was mainly done by hand by many retired men and women. In 1958, Tex started going to Chicago ASTA meetings and continued to go for over 40 years. He also started taking trips to Canada for Spear & Bishop field tours. 1968-1970 Tex, and family, lived and worked in Iowa for ACCO Seed. There he worked in research and foundation seed. He traveled to Florida to check on winter plots. From 1970-1974 he worked for Payco Seed and did research, production, and wholesale sales. Then from 1975-2003 he was a manager at Top Farm in production, research and wholesaler. He worked with many companies: Keltger, Land O’Lakes, Boebler, Farm Bureau, Midland, Legend, Spear & Bishop, Corn States, Thurston, MBS, Brayton-North, and many others. In 2003, he retired, but started working part-time for LINCO, Heartland, and many other companies until 2007 which he then retired again. Then for two years, from 2015-2017, he drove a van for Dassel-Cokato schools and enjoyed talking with all the little kids that he would pick up and drop off from school. During all those combined years of employment, he got to know many people and cherishes everyone that he met along the way. After his second retirement, Tex and Pat moved from their home of 46 years into a town home where the old Erickson Chicken hatchery was. On March 15, 2020, Tex’ love of his life passed away from stomach complications. He moved into the Dassel Nursing Home following Pat’s death and lived out the remaining years of his life there. He is survived by his two children, Debbie (Paul) Burandt, and Jonathan (Heidi) Haapala, his four grandchildren: Nick (Jenna) Burandt, Lesley, Jordan, and Grant, his three great grandchildren: Ayla, Brynn, and Kaiya, his brother, Nathan (Sharon) Haapala, sisters-in-law, Gloria Haapala and Susan Haapala along many more extended family members. He was preceded in death by his wife, Patricia, his parents, Bernard and Wincie Happala, two brothers, David Haapala and Tom Haapala.

James Tex Haapala, age 85, of Dassel died Saturday, January 8, 2022, at Lakeside Generations in Dassel. A memorial service will be held on Saturday, January 22, 2022, at 11:00 a.m. at the Gethsemane Lutheran Church in Dassel with Rev. Janine... View Obituary & Service Information

The family of James Tex Haapala created this Life Tributes page to make it easy to share your memories.

Send flowers to the Haapala family.