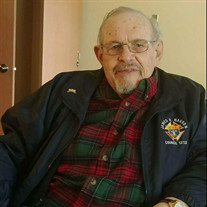 Jack Leroy Haverkamp, age 87, of Darwin, died peacefully Wednesday, May 9, 2018 at the Augustana Lakeside Health Care Center in Dassel, surrounded by family and friends. A Mass of Christian Burial will be held on Monday, May 14, 2018 at 11:00 a.m. at St. John's Catholic Church in Darwin with Father Brian Mandel officiating. Interment will be held at a later date. There will be a one-hour visitation prior to the service in St. John's Catholic Church in Darwin. The Johnson Funeral Home in Dassel is in charge of the funeral arrangements. Jack was born March 9, 1931 in Grand Rapids, Michigan and was the first-born son of Peter and Ruth Haverkamp. As he grew, his love of tennis, hard work, and fishing made long days that seemed to flourish as he continued his education. He received his Bachelor's Degree in College and went on to receive his Master's Degree in Chemical Engineering from the University of Michigan. Jack was united in marriage to Jean Harrington who preceded him in death after 40 years of marriage. Jack was inducted into the United States Army where he served from December 9, 1954, to December 7, 1956. As years past, his background drew him into Union Carbide, where he became the Plant Manager, building several plants throughout the country. He traveled to Pennsylvania, Chicago, Indiana, and Babbitt, Minnesota, where he became known as the Linde Air Man by residents. He was very active in his church, the Lions Club, Rotary, and Boy Scouts of America. From there he moved to Hastings, Minnesota. He worked at Plant #998 in Inver Grove Heights, sometimes known as the Minneapolis Plant, until his retirement in 1994. On September 15, 2001, a few days after the attack of 9/11, Jack married Judy Pelkey in St. John's Catholic Church in Darwin. It was a time of uncertainty and unrest. As they walked up the aisle as husband and wife, strains of "Let there be Peace on Earth, echoed throughout the church. Together, they made their home in rural Darwin on the shores of Lake Washington and became very active in the church. He was a member of the Knights of Columbus and worked hard to support and strengthen family life. He had an amazing green thumb and always had wonderful roses and flowers. He loved being outside with his favorite English Setter - Oakley and getting Martin houses ready for a new season. In his younger years he spent many hours hunting with his faithful companion, Nappy, going out in the search for rabbits and pheasants. Jack had been a talented high school college tennis player and had enjoyed other athletic pursuits. He especially enjoyed watching his favorite Golden Gophers Basketball Team! His Faith in God, his Family and Friends were his most precious blessings. He is survived by his wife, Judy Haverkamp, of Darwin, children, Joel (Angel) Haverkamp of Champlin, Jack Haverkamp, Jr. of West St. Paul, Robert Pelkey of Darwin, Kathy (Jerry) Maki of Hermantown, Lori (Scott) Stangland of Marble, and Sandy (Dale) Dianoski of Becker; six grandchildren, eight great-grand children, siblings, Peter (Myra) Haverkamp of Michigan and David Haverkamp of Michigan. He was preceded in death by his wife, Jean, a grandson, Derek Dianoski, and a sister, Ruth Kohl

Jack Leroy Haverkamp, age 87, of Darwin, died peacefully Wednesday, May 9, 2018 at the Augustana Lakeside Health Care Center in Dassel, surrounded by family and friends. A Mass of Christian Burial will be held on Monday, May 14, 2018 at 11:00... View Obituary & Service Information

The family of Jack Leroy Haverkamp created this Life Tributes page to make it easy to share your memories.

Send flowers to the Haverkamp family.