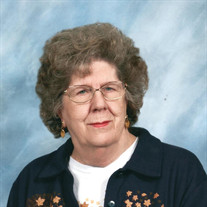 Isabel June Hansen, age 90, of Dassel died Thursday, January 21, 2021, at her residence. A visitation will be held on Tuesday, January 26, 2021, from 2:00 pm to 4:00 pm at the Johnson Funeral Home in Dassel. Isabel June (Benson) Hansen, the daughter of Gustav and Mabel (Hoglin) Benson, was born on June 21, 1930, in Annandale, Minnesota. She grew up in Annandale where she graduated from the Annandale High School. Isabel was confirmed and baptized in the Christian faith and was presently a member of the Gethsemane Lutheran Church in Dassel. On February 27, 1954, Isabel was united in marriage to Lyle Lincoln Hansen in St. Paul, Minnesota. Together they made their home in Brooklyn Center before moving to Dassel in 1986, where they built their retirement home on Little Swan Lake. She enjoyed collecting antiques and small figurines of chickens and roosters. Isabel was an avid bowler who could often be found at the Howard Lake Bowling Alley. She loved to spend time with her family for holidays and special events. She had a small group of friends who would often get together. She will be missed by her family and friends. She is survived by her children, David Hansen of Dassel, and Stewart (Betty) Hansen of St. Joseph, Missouri, step grandchildren, Anthony Holmes, and Corey Holmes. She was preceded in death by her husband Lyle on October 30, 1992, parents, Gustav and Mabel Benson, and a sister, Evangeline Benson.

The family of Isabel June Hansen created this Life Tributes page to make it easy to share your memories.

Send flowers to the Hansen family.