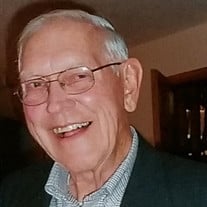 Howard K. Page Howard Kelsey Page age 92, of Eden Prairie, formerly of Dassel, died Monday, November 5, 2018, at the Brookdale Senior Living in Eden Prairie, Minnesota. A funeral service will be held on Thursday, November 15, 2018, at 11:00 a.m. at the Evangelical Covenant Church in Dassel with the pastor Darren Olson officiating. The interment will be held at the Dassel Community Cemetery following the service. A visitation will be held from 4:00 p.m. to 7:00 p.m. on Wednesday evening, November 14th, at the Johnson Funeral Home in Dassel. A one-hour visitation will be held prior to the service on Thursday at the Evangelical Covenant Church in Dassel. Howard Kelsey Page, the son of Sidney and Helen (Kelsey) Page, was born on July 9, 1926, in Duluth, Minnesota. He grew up in southwest Minneapolis until age 16 when the family moved to Rhode Island where he graduated from East Providence high school in June of 1944. Howard enlisted in the United States Army in September of 1944 and served in Europe with the 347th Infantry Division through the end of World War II. He was honorably discharged in June of 1946. Following his military service, Howard attended Brown University on the GI bill in Providence, Rhode Island where he graduated Cum Laude with a degree in Economics in 1950. He worked for the Ford Motor Company in Detroit Michigan before moving back to Edina Minnesota in 1954. In 1959 Howard moved to Lake Minnetonka. In 1972 he moved his family and business to Dassel, where he lived until the mid-1980’s when he moved to Wayzata. More recently Howard spent his winters in Tucson, Arizona and eventually made the move permanent until 2015, when he returned to Minnesota. Howard was a true entrepreneur with a passion for business. He founded Crest Electronics now known as Crest Healthcare. He also founded and operated real estate development company Greenwood Enterprises in Dassel, moving and building many homes and buildings in Dassel. In 1986 Howard moved the Cokato depot to Dassel and created the Old Depot Railroad Museum. Howard was a Paul Harris Fellow with both the Cokato-Dassel and Oro Valley, Arizona Rotary clubs. He was a member of Toastmasters in Litchfield, the Dassel History Center and a Masonic Lodge member. He was also a member of the Dassel Development Corporation and the Dassel Commercial Club. Howard always had a positive attitude and loved working, collecting railroad memorabilia, and walking the golf course in Tucson, Arizona. He loved Dassel and was always working to bring business and other opportunities to town. He had a philanthropic spirit and donated to many causes. He was a mentor to many of the people he worked with and was delighted to see others succeed. He was a family man and took great pride in his family and their accomplishments. He is survived by his daughters, Kathy (Jeffrey) Baumgartner of Bemidji / Placida, Florida, Julie (Bryan) Comstock of Eden Prairie, Beth (Dan) Balmer of Bemidji, eight grandchildren, April Ordóñez Baumgartner, William Baumgartner, Max Page, Buc Page, Louie Page, Steven Balmer, David Balmer and Jack Balmer, six great grandchildren, Ariana, Brooklyn, Lucia, Otto, William, and Valentina. He was preceded in death by his son, Kelsey, his parents, and his wives, June (Whelan) Page, Nancy (Reynolds-Fox) Page, and Kathy (Scanlon) Page, two sisters, Jane Bevier, and Ruth Page.

The family of Howard K Page created this Life Tributes page to make it easy to share your memories.

Send flowers to the Page family.