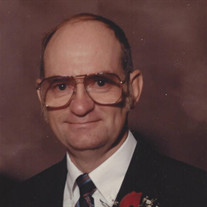 Howard Gordon Arola, age 82, of Litchfield, formerly of Dassel, died Sunday, February 10, 2019, at the Abbott Northwestern Hospital in Minneapolis. A funeral service will be held on Saturday, February 16, 2019, at 11:00 a.m. at the Dassel Church of Christ with Pastor Chris Halstead officiating at the service. The interment will be held at the Dassel Community Cemetery following the service. There will be an hour visitation prior to the service on Saturday at the Dassel Church of Christ. The Johnson Funeral Home in Dassel is in charge of the funeral arrangements. Howard Gordon Arola, the son of Hilda Esther Arola Matta, was born on October 10, 1936, in Minneapolis, Minnesota. He graduated from the Vocational High School in Minneapolis. Upon graduating from high school, Howard was inducted into the United States Air Force and served as an Aircraft Mechanic. Howard had been employed at Globe Union in Fort Dodge, Iowa as a Machinist for numerous years. He had also worked for several years at American Time and Signal in Dassel. On October 4, 1986, Howard was united in marriage to Pamela Helvick. Together they made their home in Dassel before moving to Litchfield. He loved Pam deeply and together they would take trips to Lake Okoboji where they would ride the Queen excursion boat on Lake Okoboji and ate Blackwater Taffy with their nieces and nephews. He enjoyed reading and could often be found reading and studying his bible. He loved to travel and go fishing and camping with Pam. Howard always had time to talk to a total stranger. He loved to spend time with Pam, his friends and those who were lucky enough to get to know him. He will be missed deeply. Howard is survived by his brothers-in-law, Paul (Susan) Helvick of Roseville, California; Mark (Georgia) Helvick of Corcoran, Minnesota; Gary (Cathy) Helvick of Galesburg, Illinois; and Alan (Cindy) Helvick of Galesburg, Illinois. He is also survived by many nieces, nephews and other relatives. He was preceded in death by his wife, Pam, his mother and his siblings.

Howard Gordon Arola, age 82, of Litchfield, formerly of Dassel, died Sunday, February 10, 2019, at the Abbott Northwestern Hospital in Minneapolis. A funeral service will be held on Saturday, February 16, 2019, at 11:00 a.m. at the Dassel Church... View Obituary & Service Information

The family of Howard Gordon Arola created this Life Tributes page to make it easy to share your memories.

Send flowers to the Arola family.