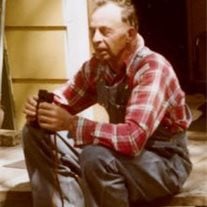 Herbert Milton Johnson, age 88, of Dassel, passed away Monday, March 23, 2015, at his home. A funeral service will be held on Saturday, March 28, 2015, at 11:00 a.m. at the Gethsemane Lutheran Church in Dassel with the Rev. Steven Olson officiating. The interment will be held at the Swan Lake Cemetery, rural Dassel following the service. A visitation will be held on Friday evening from 5:00 p.m. to 8:00 p.m. at the Johnson Funeral home in Dassel with a one hour visitation prior to the service at the church on Saturday. Herbert Milton Johnson, the son of Otto and Clara (Olson) Johnson was born on August 4, 1926, in rural Dassel, Minnesota. He grew up on the family farm North of Darwin, where he attended Darwin elementary School and Litchfield Senior High School. In 1945, he was called to serve his country during WWII. He was stationed in Okinawa as a Military Policeman and served in the very first CID (Criminal Investigation Division). He always made comments about how wonderful the weather was in Okinawa and how beautiful the orchids were. After serving two years he returned home to help run the family farm along with his dad and brother, Gilbert. Herbie was a longtime member of Swan lake Lutheran Church and served as a member of the cemetery board. On June 9, 1956, Herbie was united in marriage to Jeraldine Housman at St. Philips Rectory in Litchfield, MN. They shared 57 wonderful years of marriage. Together they made their home in rural Darwin, where they raised their five children, ran a dairy farm and raised chickens. Herbie enjoyed the outdoors. He loved to go duck hunting and deer hunting. After he retired his children surprised him with a 4-wheeler and he enjoyed many hours riding along the trails throughout his property. Herbie and Jeraldine also belonged to a card club. It was an activity they loved sharing together. They played many hours of pinochle. Herbie enjoyed spending time with his family. He loved getting all his family together for bonfires to roast hot dogs & marshmallows. Herbie especially enjoyed his grandchildren and his great grandchildren. He was a very proud Grandpa. Herbie is survived by his children, Jeff (Mary Jo) Johnson of Dassel, Joan Klehr of Wausau, Wisconsin, Janice(Jim)Maher of Darwin, Julie Johnson-Reeck of St. Paul, Jane (Troy) Bahr of Hutchinson, 18 grandchildren, Jeremy Johnson, Michelle (Jeff) Burton, Malorie (Joshua) Kutil, Kathryn (David) Ster, Philip Klehr, David Klehr, Julie Klehr, Gretchen (Eric) Sietsema, Dustin Morehouse, Heather(Travis) Daly, Chris (Nyona) Morehouse, Ian Maher, Regan Reeck, Sebastian Reeck, Jonathan Reek, Miles Reeck, Benjamin Bahr, Mason Bahr and six great grandchildren: Sophia, Elizabeth, Annika, Bridgette, Madison, and Hunter. He is also survived by his twin sister, Hildur Carlson of Dassel, brother-in-law, Bud (Joyce) Housman of Litchfield, and sisters-in-law, Phyllis Pollock of St. Michael, Kathleen Housman of Fridley. He was preceded in death by his beloved wife Jeraldine, parents, Otto and Clara Johnson, brothers, Ralph Johnson, Gilbert Johnson, sisters, Myrtle Johnson, Mabel Johnson, Lil Johnson, Margaret Floren, sons-in-law, Robert Klehr and Richard Reeck.

Herbert Milton Johnson, age 88, of Dassel, passed away Monday, March 23, 2015, at his home. A funeral service will be held on Saturday, March 28, 2015, at 11:00 a.m. at the Gethsemane Lutheran Church in Dassel with the Rev. Steven Olson officiating.... View Obituary & Service Information

The family of Herbert "Herbie" Milton Johnson created this Life Tributes page to make it easy to share your memories.