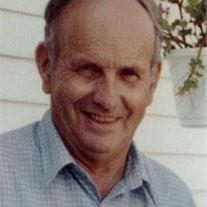 Henry George Lindgren, age 83, of Hutchinson, formerly of Dassel, died Saturday, April 13, 2013, at his residence. A funeral service will be held on Wednesday, April 17, 2013, at 2:00 p.m. at the Gethsemane Lutheran Church in Dassel with Rev. Steven Olson officiating. The interment will be held following the service at the Dassel Community Cemetery. A visitation will be held from 4:00 p.m. to 8:00 p.m. on Tuesday evening at the Johnson Funeral Home in Dassel and one hour prior to the service at the church on Wednesday. Henry "Hank" Lindgren, the son of John and Julie (Bjornstad) Lindgren, was born on January 28, 1930, at the hospital in Litchfield, Minnesota. He grew up in the Grove City area and attended district schooling for his education. Henry was baptized as an infant at Ness Lutheran Church in rural Litchfield, and was confirmed as an adult in 1954, at Faith Lutheran Church in Hutchinson. Henry was presently a member of the Gethsemane Lutheran Church in Dassel, as well as an associate member of Epiphany Lutheran Church in Apache Junction, Arizona. In October of 1951, Henry was inducted into the United States Marines and served during the Korean Conflict, until his discharge in October of 1953. On November 8, 1953, Henry was united in marriage to Marlys Barrick at the First Lutheran Church in Grove City, Minnesota. Together they made their home in Hutchinson from 1953 until 1969, when they moved to Dassel and made their home on the east shore of Lake Washington. In 1997, Henry and Marlys moved back to Hutchinson. Henry had been employed by Harold Juul Construction in Hutchinson for numerous years. He was a dedicated worker who always went above and beyond what was asked of him. He was a member of the Hutchinson American Legion Post #96 and was proud of his service to his country. Henry would spend time in the morning enjoying shaking dice, a good cup of coffee and conversation with his friends. He was fond of playing bingo and solitaire. He enjoyed the time that he was able to spend with his family and friends. Henry loved to travel and especially liked the drive to Arizona where they would winter. He is survived by his wife Marlys Lindgren of Hutchinson, daughter, Julie (Brad) Burich of Hutchinson, 5 grandchildren, Keith Larson, Elicia L'Esperance, Jordan Burich, Jeffrey Burich, and Jacob Burich, 6 great grandchildren, sister, Gladys Carlin of Cokato, and numerous other relatives. He was preceded in death by his son, John, parents, John and Julie, brother, Gordon, and a sister, Leona.

Henry George Lindgren, age 83, of Hutchinson, formerly of Dassel, died Saturday, April 13, 2013, at his residence. A funeral service will be held on Wednesday, April 17, 2013, at 2:00 p.m. at the Gethsemane Lutheran Church in Dassel with Rev.... View Obituary & Service Information

The family of Henry George Lindgren created this Life Tributes page to make it easy to share your memories.

Send flowers to the Lindgren family.