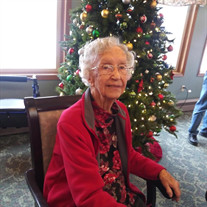 Helen Clare Sanderson, age 106, of Dassel, died Friday, November 26, 2021, at Lakeside Generations in Dassel. A military graveside service will be held at Fort Snelling National Cemetery. The Johnson Funeral Home in Dassel is in charge of the service arrangements. Helen Clare (Oster) Sanderson, the daughter of Simon and Alice (Ramey) Oster was born on December 22, 1914, in Dassel, Minnesota. Helen grew up in the Dassel area where she attended district schooling. She was baptized and confirmed in the Christian faith and was a member of the Dassel Church of Christ at the time of her death. Helen enlisted into the United States Army Air Corps as a WAAC and was stationed at Mather Field, California and served as a bake and cook from September 1, 1943. She was discharged with a rank of Mess Sergeant on November 17, 1945. On March 24, 1956, Helen was united in marriage to Eugene Sanderson in Carmel, California. Together they made their home in Monterey from 1963 until 1965 when they moved to Condon, Montana and lived in Swan Valley. May of 1983, Helen and Eugene moved back to Dassel where she has since made her home. She loved to watch and feed the birds and animals, enjoyed playing the organ, sewing, and playing scrabble with family and friends. She was a talented baker and cook and enjoyed spending time with her family and friends for holidays and special occasions. She started a women's home circle group with her sister, Ruth Skalberg. She is survived by her children, Theodore Sanderson of Minneapolis, and Thomas Sanderson of Winsted. She is also survived by several nieces, nephews, and other relatives. She was preceded in death by her husband, Eugene, her parents, siblings, Ruth Skalberg, Joel Oster, and a young brother, John Kenneth Oster.

Helen Clare Sanderson, age 106, of Dassel, died Friday, November 26, 2021, at Lakeside Generations in Dassel. A military graveside service will be held at Fort Snelling National Cemetery. The Johnson Funeral Home in Dassel is in charge of the... View Obituary & Service Information

The family of Helen Clare Sanderson created this Life Tributes page to make it easy to share your memories.

Send flowers to the Sanderson family.