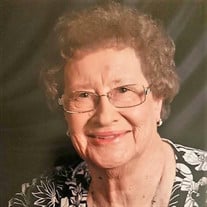 Helen Rose Mattson, age 93, of Hutchinson, formerly of Cokato and Dassel, died Friday, November 15, 2019, at Harmony River Living Century in Hutchinson. A memorial service will be held at 11:00 a.m. on Tuesday, November 26, 2019, at Stockholm Lutheran Church in rural Cokato with the Rev. Mark Little officiating. The interment of the urn will be held on a later date. There will be a time to gather one hour prior to the service on Tuesday, November 26, 2019, at the Stockholm Lutheran Church. Memorials are preferably to be sent to the Presbyterian Home Foundation/Fern Pathway. Contributions will be used for a memorial in Helen's honor. The Johnson Funeral Home in Dassel is in charge of the funeral arrangements. Helen Rose “Brandt” Wigen Mattson, the daughter of John and Lena (Johansen) Brandt, was born on July 12, 1926, in Drammen Township, Lincoln County, Minnesota. She was baptized and confirmed in the Christian faith and was presently a member of Stockholm Lutheran Church in rural Cokato. On April 8, 1944, Helen was united in marriage to Maynard Wigen at her parent’s home in Russell, Minnesota. They moved to a farm near Litchfield where they lived with Maynard’s parents and brother-in-law, Marlow. Upon Maynard’s passing, Helen and her three children moved to Litchfield, where she owned and operated Park Grocery. She had the store for many years but sold it after she was united in marriage to Harold Mattson on August 31, 1968 at Zion Lutheran Church in Litchfield. She returned to being a farm wife which she loved. Helen was a very social individual and needed to stay busy. She was constantly on the go. For 17 years, Helen worked for the Dassel-Cokato School District driving the school van. She absolutely loved the children who gave her so much joy. She was an active member of the Stockholm Lutheran Church and Birthday Club. Most of all she loved to laugh, and her true passion were her friends and family. The past two years she resided at the Harmony River Living Center, where she was well cared for and loved. She is survived by her daughters, Calla Beal of Minnetonka, Darla (Loren) Nass of Dassel, grandchildren, Stephanie (Al) Hansen, Scott (Lisa) Mattson, Ryan (Tina) Erickson, Alissa Nass, Katie (Russ) Atkinson, Lindsey (Chris) Beal, Christopher (Elisabeth) Beal, Taylor (Justin) Fain, great grandchildren, Hunter Mattson, Boedy Erickson, Grady Erickson, Henry Atkinson, and Benny Klaus. She is also survived by her nieces, nephews and friends. She was preceded in death by her first husband, Maynard Wigen, second husband, Harold Mattson, son, Gaylyn Wigen, daughter, Sharon Asplin, parents, John and Lena Brandt, and brothers, Alvin Brandt and Don Brandt.

The family of Helen Rose Mattson created this Life Tributes page to make it easy to share your memories.

Send flowers to the Mattson family.