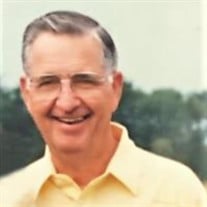 Gordon A. Bengtson, of Golden Valley, MN, died Tuesday at the Covenant Manor. A memorial service celebrating the lives of Gordon and Gladys Bengtson will be held on Saturday, July 10, 2021, at 1:30 p.m. at the Evangelical Covenant Church in Dassel. The interment of the urn at the Dassel Community Cemetery. The Johnson Funeral Home in Dassel is in charge of the memorial arrangements. Gordon A. Bengtson, the son of Oscar & Hannah (Carlson) Bengtson was born in Kandiyohi, Minnesota on 28 October 1922 and moved with his parents and 9 siblings to Dassel, MN. Those were tough years for the country, but Gordon had a happy childhood in a wonderful, loving family. He graduated from Dassel High School and enrolled at North Park College in Chicago, Illinois in 1941. In the fall of 1942 he met the love of his life, fellow student Gladys Forsberg from Sioux City, IA. They would marry on 27 August 1944 after her graduation from North Park College and completion of Gordon’s first year of Dental School at the University of Minnesota on an ROTC scholarship. Gladys worked as the secretary for the Vice President of the U of M until Gordon finished school. Gordon graduated in 1946 and set up his practice in Dassel where his parents and several of his siblings lived. In 1952 he was recalled to active duty and served as Dental Officer at Air Force bases in Columbus, Indiana and Milwaukee, Wisconsin. Upon release from active duty in 1954, Gordon, Gladys and their 3 children (Trudy, Dennis and Susan) would return to Dassel where their 4th child was born (Jennifer). Gordon continued his dental practice in Dassel until he retired in 1984. Gordon and Gladys would remain in Dassel until moving to the Covenant Village in Golden Valley, MN in 2000. The Dassel years were focused on family, faith and service. Dassel Evangelical Covenant Church was a constant in their lives. Gordon spent years on various local and denominational boards, including the Evangelical Covenant Church of America Executive Board and North Park College Board. Gladys, whose father Gunnar Forsberg was a Covenant pastor, was a mainstay in the Dassel church and served in leadership positions as well. Professionally, Gordon had a thriving practice and over the years volunteered for 10 dental mission trips to Haiti (5) Guatemala (2) and one each to Peru, Ghana, Africa and the Mideast. Gladys accompanied him on several of these trips. Gordon’s service to the dental profession was recognized in 1979 by his election to and induction in the International College of Dentists, an organization which recognizes dental professionals for conspicuous and meritorious service to the dental profession. Gordon and Gladys loved learning about their Swedish heritage (his parents and 5 older siblings were immigrants as was Gladys’ father.). They made 15 trips to Sweden, including trips with each of their 4 children and often traveled with siblings and/or nephews and nieces. Exploring family history by walking the grounds of their ancestors, seeing family landmarks and spending time with Swedish relatives was so important to them. Gordon was also a lifelong fan of all Minnesota sports teams. He and Gladys were enthusiastic season ticket holders to Vikings football and Minnesota Gopher basketball for decades. Gordon was preceded in death by Gladys (30 December 2018), his parents and 9 siblings. Gladys was preceded in death by her parents and 2 brothers. They are survived by their 4 children: Trudy (Leonard), Dennis (Kathleen), Susan (Glenn) and Jennifer (Michael), 8 grandchildren, 20 great-grandchildren and 3 step great-grandchildren.

Gordon A. Bengtson, of Golden Valley, MN, died Tuesday at the Covenant Manor. A memorial service celebrating the lives of Gordon and Gladys Bengtson will be held on Saturday, July 10, 2021, at 1:30 p.m. at the Evangelical Covenant Church in... View Obituary & Service Information

The family of Gordon A Bengtson created this Life Tributes page to make it easy to share your memories.

Gordon A. Bengtson, of Golden Valley, MN, died Tuesday at the...