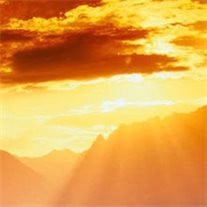 Gloria Jean Russell, age 71, of Cokato, died Thursday, November 07, 2013, at her home. A funeral service will be held on Tuesday afternoon, November 12, 2013, at 2:00 p.m. at the Gethsemane Lutheran Church in Dassel with the Rev. John Peterson and Rev. Kathy Hartley officiating. The interment will be held at the Dassel Cemetery following the service. A visitation will be held on Monday evening from 4:00 p.m. to 7:00 p.m. at the Johnson Funeral Home in Dassel and on Tuesday afternoon one hour prior to the service at the church. Gloria Jean Russell, the daughter of Zepher and Hulda "Stuber" Caron, was born on July 27, 1942, in Buffalo Lake, Minnesota. She grew up and attended school in the Brownton area. Gloria was baptized and confirmed in the Lutheran faith and was a member of Gethsemane Lutheran Church at the time of her death. On November 4, 1961, Gloria was united in marriage to Thomas Russell at Grace Lutheran Church in Brownton. Together they made their home on the Russell family farm for the past 52 years. Gloria had been employed for 21 years a Crest Electronics, Tom Thumb Grocery in Cokato and worked as a dish washer for Third Street Cafe. She enjoyed reading, sewing, cross stitch, embroidery, and was a wonderful cook. She loved to listen to country music, watching humming birds, her family and her dog, Missy were the most important things in her life. Gloria is survived by her husband, Thomas Russell of Cokato, a son, Ryan Russell of Cokato, two grandchildren, Adam Russell and Cammi Russell and one great granddaughter, Juliana Haley. She was preceded in death by her parents and a infant brother, Stanley.

Gloria Jean Russell, age 71, of Cokato, died Thursday, November 07, 2013, at her home. A funeral service will be held on Tuesday afternoon, November 12, 2013, at 2:00 p.m. at the Gethsemane Lutheran Church in Dassel with the Rev. John Peterson... View Obituary & Service Information

The family of Gloria Jean Russell created this Life Tributes page to make it easy to share your memories.

Send flowers to the Russell family.