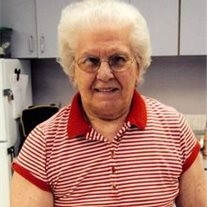 Gloria Luanne Klima Peterson, age 82, of Dassel, died Sunday, February 5, 2017, at the Cokato Manor. A funeral service will be held on Thursday, February 9, 2017, at 2:00 p.m. at the Johnson Funeral Home in Dassel with the Rev. Timothy Wheatley officiating. The interment will be held at the Dassel Community Cemetery following the service. A visitation will be held one hour prior to the service on Thursday at the Johnson Funeral Home in Dassel. Gloria Luanne Klima Peterson was born at the family home in Collinwood Township, Meeker Co, Dassel, Minnesota on September 16th, 1934, to John and Mamie (Skorpik) Klima, the youngest of 4 children. She was baptized at The Congregational Church in Silver Lake on December 19, 1943. She attended Lamson Country School and graduated from Dassel High School in 1952. On February 9th, 1957, she married Randall Archie Peterson at the Congregational Church Parsonage, Silver Lake, MN. They made their home in rural Dassel on Randall's home farm, and in 1970 in retirement, in a new home built across the road from the farm. After the cows were sold, Gloria found employment at Nortronics, later Fabritek in Cokato, The Market Place Deli in Cokato, and Hojie's Restaurant in Dassel. She was a hard worker, detasseling corn, helping with farming and milking, and later helping Randy on weekends as he mowed the Meeker County Parks. She enjoyed handwork, especially crocheting. She made and sold some of her handwork. She enjoyed gardening and sharing the bounty of her gardens and fruit trees. She was a good cook, taking pleasure in people enjoying her food. She made wonderful tasty kolaches. Her special joy in life was the many cats she lovingly cared- for over the years. She couldn't turn away a stray cat, but instead took them in and added them to the family. She was preceded in death by her husband, Randy in 2000, her parents, John and Mamie Klima, sister, Delores Klima Peterson, brothers, Harvey Klima and Milan Klima, sister-in-law, Joanne Johnson Klima, and niece, Linda Klima. She is survived by her sister-in-law, Esther Klima, nieces, Wendy (Larry) Ringgenberg, Debbie (Steve) Plamann, Pam (Tony) Hand, nephews, Ron (Ruthie) Klima, Gary (Nita) Klima, James (Kari) Klima, Michael (Julie) Klima, great nieces and nephews, other relatives and friends. Peace be to her memory.

Gloria Luanne Klima Peterson, age 82, of Dassel, died Sunday, February 5, 2017, at the Cokato Manor. A funeral service will be held on Thursday, February 9, 2017, at 2:00 p.m. at the Johnson Funeral Home in Dassel with the Rev. Timothy Wheatley... View Obituary & Service Information

The family of Glorai Luanne Klima Peterson created this Life Tributes page to make it easy to share your memories.