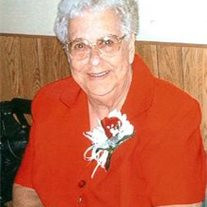 Gladys Christine Carlen, age 86, of Cokato, died Monday, November 24, 2014, at the Meeker Memorial Hospital in Litchfield. A funeral service will be held at North Crow River Lutheran Church in rural Cokato on Saturday, November 29, 2014, at 2:30 p.m. with Rev. Michael Nelson officiating. There will be a visitation at the North Crow River Lutheran Church in Rural Cokato on Saturday from 1:00 p.m. to 2:30 p.m. The Johnson Funeral Home in Dassel is in charge of the funeral arrangements. Gladys Christine Carlen, the daughter of John and Julia (Bjornstad) Lindgren, was born on January 21, 1928, in Litchfield, Minnesota. She was baptized and later confirmed on April 11, 1943, at the First Lutheran Church in Grove City. Gladys attended and graduated from the Grove City High School. She had been employed as a Telephone Operator and later a waitress at Dassel Bowl Cafe, and 3M in Hutchinson. On December 18, 1948, Gladys was united in marriage to James Barrick. Together they made their home in the Dassel Area. To this marriage they were blessed with six children. On October 20, 1973, Gladys was united in marriage to Howard Carlen in Milbank, South Dakota. Together they operated a gas station in Darwin. They made their home in the Dassel area for several years before moving to Northern Minnesota where they owned and operated two motels They retired to Missouri for several years before they moved back to Dassel where they made their home in the summer and wintered in Bullhead City then Lake Havasu City, Arizona. For the past 11 years, Gladys has made her home in Cokato. She loved to play cards, games, antiques, and when she was younger, she loved to dance. Gladys enjoyed traveling with her grown children, especially the last five years. She loved to spend time with her grandchildren, great grandchildren, her great great grandchildren and her children for family holidays. She is survived by her family, Judy (Milton) Larson of Cokato, daughter in law, Joyce Barrick of Hutchinson, Jeannie Tessmer of Hutchinson, Jocelyn (Brad) Larson of Lexington, Nebraska, Jennifer (Gail) Plaisance of Buffalo Lake, and Jerald (Nina) Barrick of Litchfield. 19 grandchildren, 25 great grandchildren and 3 great great grandchildren. She is also survived by one sister in law, Marlys Lindgren of Hutchinson, and many nieces and nephews, and other relatives. Preceded in death by, husband, Howard Carlen, son, James Barrick JR., son in law Neal Tessmer, her parents, two brothers, Henry Lindgren and Gordon Lindgren and one sister, Leona Lindgren.

The family of Gladys Christine Carlen created this Life Tributes page to make it easy to share your memories.