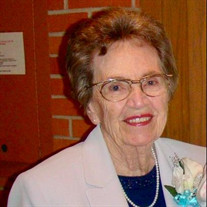 Gladys Mae Bengtson, age 93, of Golden Valley, formerly of Dassel, died Sunday, December 30, 2018, at the Colonial Acres Health Care Center in Golden Valley. A memorial service celebrating the lives of Gordon and Gladys Bengtson will be held on Saturday, July 10, 2021, at 1:30 p.m. at the Evangelical Covenant Church in Dassel. The interment of the urn at the Dassel Community Cemetery. The Johnson Funeral Home in Dassel is in charge of the memorial arrangements. Gladys Mae Bengtson, the daughter of Gunnar and Edna (Carlson) Forsberg, was born on May 3, 1925, in Kansas City, Missouri. Gladys was baptized and confirmed in the Evangelical Covenant Church and was a faithful member of the Evangelical Covenant Church in Dassel for many years and Salem Covenant Church in New Brighton after moving to Golden Valley. Gladys grew up in Sioux City, Iowa, where she graduated from high school. Gladys continued her education by attending North Park Junior College in Chicago, Illinois. On August 27, 1944, Gladys was united in marriage to Gordon Bengtson in Batavia, Illinois. Together they made their home in the Minneapolis area while Gordon completed his dental studies graduating with a Doctorate of Dental Studies degree (DDS). While Gordon attended school, Gladys was employed as secretary for the vice president of the University of Minnesota from 1944 until 1946. In 1946, Gladys and Gordon moved to Dassel where they raised their four children. Gladys was an active member in her church family and faithfully attended bible study and served in her local church. Gladys loved to spend time with her children and grandchildren. She especially enjoyed sporting events and cheering on the Minnesota Vikings and Minnesota Gophers. She will be missed by her family and her friends. She is survived by her husband, Gordon Bengtson of Golden Valley, her children, Trudy (Len) Sis of Aurora, Illinois; Susan (Glenn) Behnke of Rantoul, Illinois; Dennis (Kathleen) Bengtson of Cornelius, North Carolina; and Jennifer (Michael) Pan of Long Lake, Minnesota; eight grandchildren, 19 great grandchildren, 3 step great grandchildren and several nieces, nephews and other relatives. She was preceded in death by her parents, and two brothers, Clarence Forsberg and Charles Forsberg.

The family of Gladys Mae Bengtson created this Life Tributes page to make it easy to share your memories.