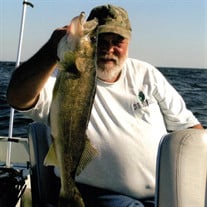 Gerold Dwight Hatfield, age 67, of Cokato, passed away Thursday, March 31, 2022, at Regions Hospital in St. Paul, Minnesota. A memorial service will be held on Saturday, April 9, 2022, at 11:00 a.m. at the Evangelical Lutheran Church in Cokato with the Rev. Tim Wheatley officiating. The interment will be held at the Dassel Cemetery at a later date. There will be a time to gather one hour prior to the service at the Evangelical Lutheran Church in Cokato. Gerold Dwight Hatfield, the son of Gerold and Betty (Plath) Hatfield was born on November 23, 1954, in Litchfield, Minnesota. Dwight grew up in the Darwin area. Dwight was baptized and confirmed at the All-Saints Lutheran Church in Darwin. On June 16, 1973, Dwight was united in marriage to the love of his life of 49 years, Bonnie Gillman at the Howard Lake United Methodist Church. Together they made their home in Cokato where Gerold was employed by Fabri-Tech and CTS in Cokato and AbleConn in New Hope. He had also been employed at Proto Labs in Maple Plain. Dwight was an avid outdoorsman enjoying every second he had to connect with the wilderness. A tenacious angler, constantly seeking to perfect his walleye fishing skills on the open water or by dropping a line through a hole punched in a frozen lake. If he wasn’t chasing the elusive walleye, he was preparing to take on the winged and legged creatures that roam these lands. Whether the quarry was bear, deer, turkey, ducks, or geese he always departed on each quest with a smile on his face. One of his favorite recollections was the sight and sounds of greater Canadian geese, feet down, wings cupped, committing to the decoys. “Ah, what an amazing sight”, he would proclaim. The little time he had left when not in the woods or on the water, you could find Dwight riding his motorcycle. A man of his word, true to himself and his beliefs, with an understanding that a handshake was his word. Above all he loved his family. Spending countless hours camping, reenacting WrestleMania, teaching his grandchildren to tie a hook, throwing a ball, spending time with his wife at their cabin on Lake Mille Lacs, or telling a one-of-a-kind life story, is what made Dwight truly happy. He is survived by his wife, Bonnie Hatfield of Cokato, children, Tina (Nick) Joiner of Menomonie, Wisconsin; Chad (Heather) Hatfield of Waynesville, Missouri; and two grandchildren, Jade Hatfield and Hunter Hatfield, siblings, Paul Hatfield of Litchfield, Beth (Tim) Hatfield Hedgespeth of Loveland, Colorado; Wendy (Ronald) Seefeldt of Dassel. He was preceded in death by his parents, Gerold and Betty Hatfield.

Gerold Dwight Hatfield, age 67, of Cokato, passed away Thursday, March 31, 2022, at Regions Hospital in St. Paul, Minnesota. A memorial service will be held on Saturday, April 9, 2022, at 11:00 a.m. at the Evangelical Lutheran Church in Cokato... View Obituary & Service Information

The family of Gerold Dwight Hatfield created this Life Tributes page to make it easy to share your memories.

Send flowers to the Hatfield family.