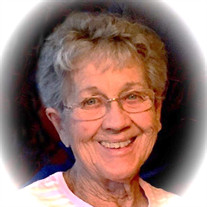 Geraldine (Jerry) Bernice Thompson, 89 of Bella Vista Arkansas, passed away surrounded by her family on November 6, 2018 at Lakeside Healthcare Center in Dassel, Minnesota. Geraldine "Jerry" Bernice Thompson was born on May 3, 1929 in Wood River, Illinois to Everett Delmer and Maxine Roe (McKinney) Rich. Geraldine attended Wood River Hartford Elementary School, Lewis and Clark Jr. High, and Wood River High School, where she was crowned Harvest Queen in her graduating year of 1946. Jerry worked as a secretary and a sales clerk for short periods but her longest tenure was a Medical Assistant at Rice Clinic in Stevens Point Wi. Jerry and Dale Thompson were married on September 16, 1950 at First Baptist Church in Wood River, Illinois, where they resided for a short time before moving to Saint Louis, Missouri. There they purchased their ﬁrst home and began their family. They also lived in Bloomington, Minnesota, Stevens Point, Wisconsin and then in 1987 retired to Bella Vista, Arkansas where they enjoyed many years together. Jerry enjoyed playing games with family and friends. Some of her favorites were Scrabble, Mexican Train, Joker and Dominoes and she tried not to miss the cryptoquip and crossword puzzle in the daily paper. She and Dale would often be found over a card table trying to ﬁnd that last few pieces of a jigsaw puzzle. Jerry was an avid tennis fan who enjoyed both to watch and play. Jerry and Dale would pursue matches with their children and spouses, whenever the opportunity presented itself. She also took an interest in golf in her retirement years in Bella Vista where she and Dale spent a great deal of time improving their game. Crochet and knitting were another favorite pastime of Jerrys as the grand babies needed cozy blankets and booties! She made precious Christmas stockings, and other knitted items for each and every one of her children and early grandchildren. They were priceless gifts! Jerry was also an exceptional cook and hostess for entertaining! So many special holidays, birthdays and graduations were made spectacular by fantastic food and gracious generosity. It was always a memorable time for all to be in Jerry's kitchen. Not uncommon at all for even the grandchildren to ask Grandma for one of her famous recipes. Jerry was baptized in the First Church of Christ (Christian) in Wood River, IL. and was a member of the Village Baptist Church in Bella Vista, Arkansas until the time of her death. She was always an active member of her church. She was faithful to her beliefs, not only in word, but in deed and attended church regularly, participating in Bible Study and Women’s Groups. She was often the Greeter and did so with a warm smile and an enthusiastic welcome. Jerry is survived by husband Dale and children Gary of Bella Vista, Arkansas; Gail (Tom) Ganser of Dassel, Minnesota; Greg (Dawn) Thompson of Parker, Colorado; and Gwen (Daryl) Morey of Stevens Point, Wisconsin; 12 grandchildren: Brittany Thompson of Florida; Angela (Mark) Caine of Corinth, Texas; Jeﬀ and (Stephanie) Ganser of Rosemount, Minnesota; Carolyn and (Seth) Baso of Maple Grove, Minnesota; Bethany Ganser of Buﬀalo, Minnesota; Cole (Alix) Thompson Castle Rock, Colorado; Christopher (Karen) Thompson; Dale (Kaitlyn) Thompson both of Parker, Colorado; Brock, Danielle, Micah and Clayton Morey all of Stevens Point, Wisconsin; 16 great grandchildren: Madison Thompson of Port Saint Lucie, Florida; Drake, Braeden, Micah, Tate, Gavin, and Brekkin Caine of Corinth, Texas; Layton Thompson of Castle Rock, Colorado; Jackson, Carter, Griﬃn and Sawyer Ganser of Rosemount, Minnesota; and Elin, Anna, Owen, and Esme Baso of Maple Grove, Minnesota. Jerry is also survived by sisters Doris Stone of Alton, Illinois; Janet Sue (Terry) Primas of Duke, Missouri; as well as one brother David Joe (Linda) Rich of Bethalto, Illinois. Jerry was preceded in death by her parents Everett Delmer and Maxine Roe (McKinney) Rich; sister Shirley (Bill) Wiemers, of Dorsey, Illinois; and two brothers, Franklin “R.B.” (Patty) Rich; and Frank "Bub" (Joan) Rich, Alton, Ill. Jerry was also preceded in death by a grandson Tyler Thompson of Port Saint Lucie, Florida. A celebration of her life will be held on Monday, November 19, 2018 at Johnson’s Funeral Home in Dassel, Minnesota with a time of visitation from 10:00 a.m. to 11:00 a.m. and a service following with Pastor Matt Miklasz oﬃciating. Interment will be held at Dassel Community Cemetery, following the service.

The family of Geraldine Bernice Thompson created this Life Tributes page to make it easy to share your memories.

Send flowers to the Thompson family.