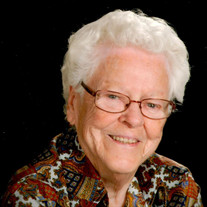 Geraldine Martha Moum, age 95, of Dassel, formerly of Crosby, North Dakota, died Tuesday August 13, 2019, at the Lakeside Health Care Center of Dassel. A visitation will be held on Thursday August 15, 2019, from 5:00 p.m. to 7:00 p.m. at the Johnson Funeral Home in Dassel, Minnesota. A visitation will be held one-hour prior to the funeral service that will be held on Saturday, August 17, 2019, at 2:00 pm at the Concordia Lutheran Church in Crosby, North Dakota with interment at the Concordia Cemetery following the service. Geraldine Martha (Granrud) Moum, the daughter of Theodore Gerhard and Gertrude Margaret (Dewing) Granrud was born on March 1, 1924, on the family farm in Short Creek Township, Portal, North Dakota. Geraldine was baptized and confirmed in the Lutheran faith and was a member of the Concordia Lutheran Church in Crosby, where she had been involved in Ladies Aid, and taught Sunday School for many years. She had been attending Gethsemane Lutheran Church in Dassel with her granddaughter’s family for the past few years. Geraldine grew up in the Short Creek area where she attended country school and in the 10th grade started to attend Columbus High School in Columbus, North Dakota. Geraldine graduated from high school in 1942. Following graduation, she sat for the state teacher’s exam and in September began teaching. The following summer, she attended a summer program at Minot State College. She taught for a total of eight years in one room country schools. Most of those years were in small communities in Western North Dakota and Eastern Montana. On November 4, 1945, Geraldine was united in marriage to Marvin Leroy Moum at the Glenwood Lutheran Church in rural Crosby, North Dakota. Together they made their home in Crosby and Williston, North Dakota. Geraldine continued to teach in country schools in Burke and Divide counties and for one year in Medicine Lake, Montana, before moving back to Crosby. In 1947, they celebrated the arrival of their daughter, Sonja who was the light of Geraldine’s life. On July 11, 1952, Geraldine was employed as an agricultural clerk at the Agricultural Stabilization Conservation Service Office (ASCS) in Crosby. Following the death of her daughter, son-in-law and granddaughter, Geraldine accepted with love the job of raising her granddaughter, Misti. Geraldine and Marvin’s marriage ended in 1973. On January 4, 1985, Geraldine retired after working in the ASCS office for 30 years. One of Geraldine’s fondest memories was when she received a month of vacation and she traveled to the east coast with her granddaughter Misti. Together they spent time in Washington D.C., Boston, Massachusetts, and New York, New York. Yes, she even bravely drove in Downtown New York City. Geraldine enjoyed spending time having coffee with her friends. She loved her family with a ferocious love, a love that transcended distance. We all new that we had a champion in our corner that loved us and would hold us accountable. We can all say that we are better people for having the love of Geraldine. Her last words were “I Love you” to her grandsons. She enjoyed driving and taking drives through the countryside, even after she couldn’t drive, she always enjoyed taking a ride or going shopping. Geraldine was an avid walker for most of her life and would compete in the Crosby Fun Run, and at the age of 90 was the oldest participant to compete. She had crochet numerous afghans over the years for family and friends. She also enjoyed crocheting clothing for china dolls. She was an avid reader and often read to her grandchildren for hours. She loved children and would keep candy in her purse and became known as the “Candy Lady” by giving candy to a child to brighten their day just a little bit. She had been a Girl Scout Leader for several years. Geraldine was involved in many civic organizations. She was a lifetime member of the American Legion Auxiliary in Crosby; Sons of Norway, Vidda Lodge, she was a member of the Concordia Lutheran Church and was a member of NARFE (National Association of Retired Federal Employee’s). She had served as an election judge for numerous years. She is survived by her granddaughter, Misti (Thomas) Johnson of Dassel, Minnesota, great grandsons, Tavis Johnson and Kjel Johnson of Dassel, Minnesota, sister, Delores Aaberg of rural Noonan, North Dakota, and several nieces, nephews, and cousins. She was preceded in death by her daughter and son-in-law, Sonja and Charles Grochow, infant granddaughter, Kristi Grochow, siblings, Gerdius and her husband, Myron Watterud, Dale and his wife, Marie Granrud, Delano Granrud, and her former husband, Marvin Moum.

The family of Geraldine Martha Moum created this Life Tributes page to make it easy to share your memories.

Send flowers to the Moum family.